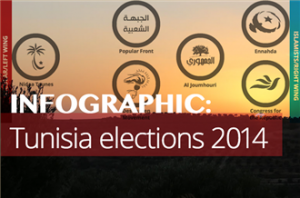 Tunisia has voted in historic elections to choose its first parliament since the overthrow of long-time ruler in 2011 that sparked the ‘Arab Spring’ protests.

Votes were being counted across the country on Sunday as Tunisians cast their ballots in parliamentary elections, four years after the ouster of autocrat Zine El Abidine Ben Ali.

Many polling stations reported high turnouts and long lines early in the day, with an estimated 60 percent of the 5.2 million registered voters turning out to vote for the 217-seat parliament.

“The spotlight is on us and the success of this [vote] is a guarantee for the future,” Prime Minister Mehdi Jomaa said as he cast his ballot.

US President, Barack Obama called the election an “important milestone in the country’s historic political transition”.

“In casting their ballots today, Tunisians continued to inspire people across their region and around the world,” Obama said.

Despite being hailed as a beacon of hope compared with other ‘Arab Spring’ countries, the past three and a half years have been marked by political turmoil, violence and a faltering economy; bringing disillusionment to many over the democratic process.

Sunday’s election pitted Tunisia’s largest party, Ennahda, against its secular rival Nidaa Tounes (Tunisia’s Call), and an array of leftist and Islamist groups, with analysts saying no single group was expected to win a majority.

Nida Tounes, led by veteran politician Beji Caid Essebsi, has been presenting itself as the only force strong enough to stand up to Ennahda that has a strong following among the poor.

Ennahda has proposed the formation of a government of national unity after the election and has not put forward a candidate for a November 23 presidential vote, keeping its options open over whom it will back.

Election observers said there were no reports of violence, despite threats of attack during the vote.

On Friday, police stormed a house in the Tunis suburb of Oued Ellil after a 24-hour standoff, killing five women and a man who they described as “terrorists.”

The government said more than 80,000 security personnel had been deployed around the country and up to 22,000 observers, 600 of them foreigners, monitored the elections.