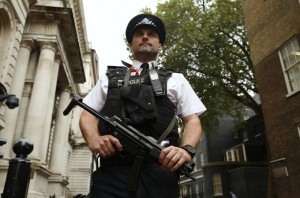 British police have taken a 25-year-old woman into custody on suspicion of terrorism offences related to the ongoing civil war in Syria, officials have said.

London’s counter terrorism command said on Wednesday that officers had arrested the woman in Bedfordshire, north of the capital, on suspicion of preparing terrorism acts.

The police said she had been taken to a police station in London for questioning.

Two addresses in Bedfordshire were being searched, they added.

Last week, four men were charged with swearing allegiance to the Islamic State of Iraq and the Levant (ISIL), who have seized large swathes of Syria and Iraq, and preparing to launch an attack on policemen or soldiers in the capital.

On Tuesday, London police chief Bernard Hogan-Howe said at least five Britons were travelling to Iraq and Syria every week to fight for ISIL, while the authorities estimate that about 500 Britons have already traveled to the region to join the fighting.

Mark Rowley, Britain’s national policing spokesman for counter-terrorism, said last week that the police had made 218 arrests so far this year, and that detectives were carrying out security investigations at an “exceptionally high” pace not seen in years.