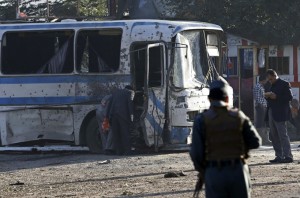 In a perfectly executed plan, two suicide bombers have targeted military buses in the Afghan capital of Kabul killing at least seven people, just a day after the new government signed a security pact with the United States.

Sources confirm that seven Afghan National Army officers were killed in one of the attacks near the University of Kabul early on Wednesday. At least 15 people were wounded in that attack.

In an attack on another army bus, six people were reportedly injured near a police station in the north of the capital.

The Taliban claimed responsibility via Twitter, according to AFP news agency.

Afghan security officials have faced a resurgent Taliban in recent months, with an average of 18 Afghans killed every day this year, according to authorities.