The United States of America has reportedly recorded another case of Ebola victim in the God’s own country. 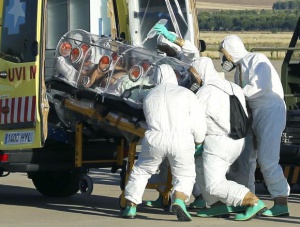 However, the United Nations’ Ebola mission chief has expressed fears that the world is lacking behind in the battle to contain Ebola virus from further spread.The two cases of the ravaging disease in the United States are both health officials who treated the late Duncan before he reportedly died last week, becoming the first person diagnosed with Ebola disease on the U.S soil.

Meanwhile, the World Health Organization,WHO, in its recent reports revealed that no fewer than 4,447 people have so far died of Ebola Virus Disease, EVD, across the world with most casualties recorded in West African countries like Sierra Leone, Guinea and Liberia.

According to BBC, Ebola outbreak started in December 2013 but was confirmed in March, 2014.

Speaking on Tuesday at a special session of the UN Security Council, Anthony Banbury, noted that if Ebola was not stopped now, “the world would face an entirely unprecedented situation for which we do not have a plan.”

However, President Barack Obama is slated to hold a video conference with British, French, German and Italian leaders to discuss the Ebola crisis later today (Wednesday).

It would be recalled that last weekend, a 26-year-old nurse identified as Nina Pham, who also contracted Ebola from the index case at a Dallas hospital is reportedly said to stable, Doctors at the Health Presbyterian hospital confirmed on Tuesday.

The WHO defined the outbreak as the “the most severe, acute health emergency seen in modern times“. The US and UK are among countries to have presented scanning at airports to check its further spread.