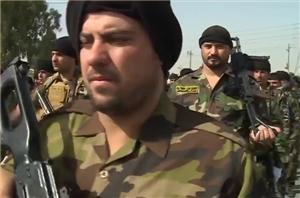 The US military has airdropped weapons and supplies to Kurdish fighters defending the Syrian city of Kobane against the Islamic State in Iraq and the Levant (ISIL) group, despite its ally Turkey’s declarations opposing such a move.

The airdrops on Sunday were the first of their kind and followed weeks of US and coalition air strikes in and near Kobane, a city located near the Turkish border.

Turkey rejects any arms transfers to the Kurdish fighters in Kobane despite the fact that the group has repeatedly fired mortar rounds near the Syrian-Turkish border.

In a statement on Sunday night, US Central Command said C-130 cargo planes made multiple drops of arms, ammunition and medical supplies provided by Kurdish authorities in Iraq.

It said they were intended to enable continued resistance to the ISIL’s efforts to take full control of Kobane.

The Central Command said earlier on Sunday that it had launched 11 air strikes overnight in and around Kobane.

“Combined with continued resistance to ISIL on the ground, indications are that these strikes have slowed ISIL advances into the city, killed hundreds of their fighters and destroyed or damaged scores of pieces of ISIL combat equipment and fighting positions,” it said.

Turkey views the main Syrian Kurdish group, the PYD, as an extension of the PKK or the Kurdistan Workers’ Party, which has waged a three-decade-long insurgency in Turkey and is designated a “terrorist group” by the US, EU and NATO.

“The PYD is for us, equal to the PKK. It is a terror organisation,” Erdogan said on his return from a visit to Afghanistan.