Home Entertainment Usher admits that he get tough with Justin Bieber when he has...
Facebook
Twitter
WhatsApp 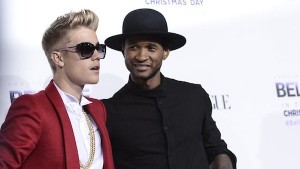 The 36-year-old singer admits he can be very tough on the 20-year-old star and doesn’t always approve of his behaviour, but tries to be supportive.

Usher said: ‘I can say I’m not happy with all the choices my friend has made, but I’m supportive of him. He’s making his own decisions and it’s important to show support.’ He added: ‘Our relationship is more man-to-man now. I try my hardest to give as much positive reinforcement as I can. I’ll punch him in the f**king chest when I need to, and give him a hug and kiss when I need to.

Usher has worked with the Canadian star since he was a young teenager but told Billboard magazine their relationship isn’t just professional. He said: ‘It’s more than just mentoring. I love the kid.’

The ‘OMG’ hitmaker rushed to Justin’s defence earlier this year after a video emerged of him singing the N word repeatedly in a song when he was 14. He said at the time: ‘As I have watched Justin Bieber navigate difficult waters as a young man, I can tell you that he hasn’t always chosen the path of his greatest potential, but he is unequivocally not a racist.  ‘What he was five years ago was a naive child who did not understand the negative power and degradation that comes from playing with racial slurs. What he is now is a young man faced with an opportunity to become his best self, an example to the millions of kids that follow him to not make the same mistakes.’