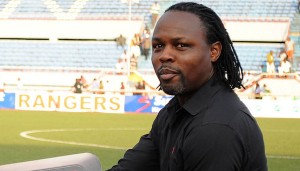 At this current form, the Super Eagles of Nigeria might not qualify for the 2015 African Cup of Nations and this is what former Nigerian footballer, Victor Ikpeba thinks.

Ikpeba told journalists: ‘For how long will Keshi build the Eagles? He has  been building this team since 2012 and still wants to continue building in 2014. No, he is killing the team. What type of builder is he?’

Ikpeba, who is now a soccer pundit with Supersport, spoke of his dissatisfaction with the team’s coach over the 2015 AFCON qualification. ‘He has placed us on the hard corner of qualification for the Nations Cup in Morocco. While Nigerians are gritting about their chances, he has invited rookies for the must win matches against Sudan. Keshi needs to ask himself questions, he should be a critic unto himself.  He is either blaming the players or attacking even ex internationals who criticize him.’

Victor Ikpeba, who retired in 2000, played thirty-one international matches and scored seven goals for Nigeria, with appearances at the FIFA World Cups in 1994 and 1998 under his belt. Ikpeba helped Nigeria win the 1994 African Nations Cup and the Olympic football gold medal in 1996.