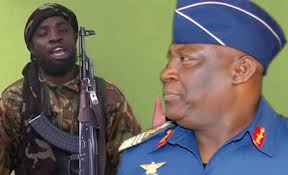 Vimtim village in Adamawa State, the native town of the Chief of Defence Staff, Air Marshal Alex Badeh, has finally been fallen to the Boko Haram insurgents.

According to Residents in the area, the insurgents have sacked locals of the village. A source, who confirmed the incident, said before the capture of Vintim on Thursday, the troops stationed there and the entire villagers were evacuated as the insurgents embarked on a looting spree and burning of property.

The takeover of Vimtim came barely 24 hours after Mubi, the second largest town in Adamawa State, was overrun by the insurgents.

Meanwhile, the state government has dispatched over a hundred buses to comb Mubi and its environs for people trapped and stranded for onward transit to the Internally Displaced Persons camp in the State capital.

Governor James Ngilari gave the directive Thursday afternoon when concerned citizens of Mubi visited to brief him on the current development in the area.