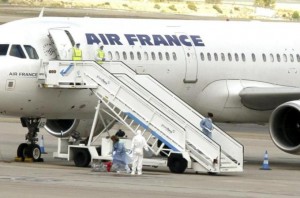 The WHO has said it is focusing its attention on 15 countries to prevent the spread of Ebola, as the EU announced a review of its entry policies and the disease was reported in the last untouched area of Sierra Leone.

Dr Isabelle Nuttall, the WHO’s global director, said on Thursday that cases were doubling every four weeks and that health officials were trying to prevent the disease spreading from Liberia, Sierra Leone and Guinea, the worst-hit nations, to neighboring countries and those with a strong travel and trade relationship.

Nuttall said: “The objective is to stop the transmission from occurring in these countries. They may not have a case but after one case we don’t want more. These countries need to be better prepared.

“This week we will cross 9,000 cases of Ebola and 4,500 deaths. The outbreak continues to hit health workers hard. So far 427 health care workers have been infected with Ebola and 236 have died.”

The statement came as Sierra Leone reported two infections in the northern area of Koinadugu, the last untouched district in the country, despite strict safety precautions and limited contact with the rest of the country.

The EU also announced that it was reviewing its screening controls for airline passengers leaving west Africa.

After an emergency meeting of EU health ministers, EU health chief Tonio Borg said the WHO and the EU would look into “conflicting reports” about whether the screening in Liberia, Sierra Leone or Guinea was good enough.

As alarm grew outside Africa over the disease’s potential spread, an Air France plane was isolated at Madrid after a passenger who had traveled from Lagos in Nigeria reported a fever and shivers.

The 163 passengers and crew were kept aboard the plane until the passenger was taken to hospital. The Spanish health ministry said it was treating the incident as a suspected case of Ebola.

In the US, meanwhile, disease control officials admitted they had allowed a nurse to fly home after treating an Ebola victim. She later fell ill with the disease.