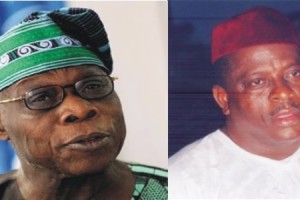 The Chairman, Mobilisation Committee of the Peoples Democratic Party (PDP) in the Southwest, Prince Buruji Kashamu, has again denied being indicted in the United States for drug-related offences.

Kashamu was reacting to a statement credited to former President Olusegun Obasanjo yesterday in which he reiterated his stance not to have anything to do with PDP until something was done about having an indicted drug baron – in apparent reference to Kashamu – as the party’s leader in the Southwest.

In a counter-response last night, the PDP chieftain said: “My attention has been drawn to yet another diatribe against my person by former President Olusegun Obasanjo in what was supposed to be his response to the pleas made to him to come back to the Peoples Democratic Party (PDP).

“His statement is yet another cocktail of lies served with his legendary deceit”.

“He said he was displeased at my allegedly being made the leader of the party in the South West. First, it should be noted that as against his earlier assertion that I am ‘a wanted habitual criminal…for whom extradition has been requested by the US Government…’ he has now described me ‘as an indicted drug baron wanted in America’.

According to Kashamu, the former president used him to prosecute his battles against former Governor Gbenga Daniel. He, however, noted that “When it was time to field candidates for the 2011 general elections, he brought his stooge, Gen. Adetunji Olurin, and asked me to roll the party structure behind his anointed candidate”.

The Southwest PDP leader continued: “In his usual holier-than-thou manner, he talked about not being able to work with me because of his principles, honour and integrity. But the questions Nigerians should ask him are: where were his principles when he used to take me into the inner recesses of his abode? Where was his honour when he served me breakfast, lunch and dinner in his Hilltop mansion? Where was his integrity when he mounted the rostrum to sing my praises, praying for me as he did in May 2010 during a reception for the former Minister of Commerce and Industry, Senator Jubril Martins-Kuye?

“Despite his pretensions, the reason I have become the target of Obasanjo’s wicked campaign of calumny and blackmail is his perceived loss of political relevance in Ogun State and the South West. He is against the second term ambition of President Goodluck Jonathan and he had wanted to use the erstwhile National Secretary, Olagunsoye Oyinlola; the former National Auditor, Bode Mustapha and the ex-National Vice-Chairman, Segun Oni, to thwart Mr. President’s re-election. The almighty Allah Subhana wa tala used me to stand up to him and the rest is history.

“Before his very eyes the PDP in the South West is on a rebound and we are winning elections.

“Now, on the issue of my so-called indictment in the United States, I wish to state for the umpteenth time that I am not wanted by anyone. Even if that were the case, there are processes and procedures to follow, and they are not subject to anyone’s whims and caprices, not even Obasanjo’s because no man is God.

“I have never in stepped my feet into the U.S neither do I have any business there. I was wrongly accused, arrested, tried and freed over the same indictment. If after a full trial on the basis of the same indictment, the British courts exonerated me, which other indictment is Obasanjo talking about? What happens to the general principle of International Law on double-jeopardy?” Kashamu asked.