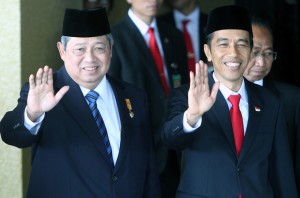 Joko “Jokowi” Widodo has been inaugurated as Indonesia’s new president, facing the challenges of rebooting a slowing economy and working with a potentially hostile opposition that has already landed some blows against him.

Widodo, the first Indonesian president not to come from the ranks of the country’s established political, business and military elite, took the oath of office in a ceremony at the parliament in the capital, Jakarta, attended by regional leaders and US Secretary of State John Kerry.

A former furniture salesman, the 53-year-old Widodo rose from humble beginnings to become Jakarta’s governor before winning July’s election with 53 percent of the vote.

Thousands gathered on the streets of the capital, Jakarta, waving flags and banners to celebrate the unprecedented ascent of the small-town businessman to leader of the country with the world’s biggest Muslim population.

Widodo is an avid heavy metal fan and is expected to join the celebrations later on Monday and jam with a rock band.

“He has climbed up to the top of the pyramid but he’s still weak within the powerful political class,” said Achmad Sukarsono, a political analyst at the Habibie Centre, think-tank.

Widodo has been struggling to build support in parliament without indulging in the old game of trading support for jobs, but his refusal to swap cabinet posts for backing has driven unaligned parties to the opposition, leaving him with a minority that is set to face resistance to his reforms.

But economic growth on the back of a commodities boom is now slowing, and a recovery is being hampered by weak infrastructure, rampant corruption and red tape.

Economists say Widodo must soon make a decision on how much to cut subsidies on fuel that unless trimmed will cost the government a budget-busting $30bn-plus this year.

The move will likely stoke protests from political opponents and could trigger street demonstrations.

He can also expect resistance from opposition parties still smarting from the defeat of their candidate, a wealthy general with close ties to the country’s former dictator Suharto.

The coalition against him has already captured most of the important positions in the parliament and last month voted to end direct regional elections, a key plank of the country’s democratic transition since Suharto was ousted in 1998.