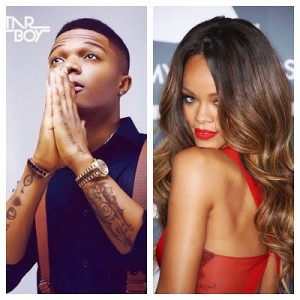 The issue has been a topic before and it’s on again.

In a recent interview on the Capital Xtra show with DJ Abrantee in London while promoting his new album ‘Ayo,’ Nigeria’s award winning pop sensation, Wizkid has confirmed he was with American super star, Rihanna in the studio while he was in Los Angeles. Not just that, Wizkid said he wrote some songs for her album project.

In his words, Wizkid said: ‘Yea, I went to the studio to write something for her, she was in the studio as well, big shout out to Rihanna, so we made something together hopefully it gets picked. We’ll still do more stuffs together, you know she’s a cool person, I’m going back to Los Angeles so definitely I’m going to get back in the studio with her again.’