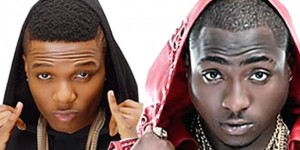 He has been in the news for the past few weeks and he continues to still make headlines.

Wizkid might have been congratulated by Davido after releasing his sophomore album titled Ayo last month but every doubt as to whether their beef is still on was dispelled recently by the Star Boy boss.

Wizzy, while speaking in a recent interview on Tuesday, October 14, 2014, was asked about a possible collaboration with Davido and he didn’t say more than replying tersely: ‘There is nothing like that.’

The two rivals have traded words in different interviews and across social media in recent times and if the words and mannerisms of the ‘In My Bed’ singer is anything to go by, he not ready to end the feud yet.