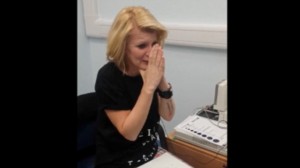 Some people go to outrageous lengths to keep something from their boyfriend or girlfriend, but few go as far as a waitress in Kodiak, Alaska.

The waitress, identified only as “Tina,” dated a fisherman for nine months and pretended she was deaf the entire time without her beau finding out.

The woman narrates this bizarre story in a frankly ridiculous reenactment on “My Crazy Love,” a new series debuting Oct. 28 on Oxygen.

Tina says the first meeting was like slow-motion, mainly because she was shocked there was actually an attractive single guy in Kodiak, Alaska.

“He turns around to his buddies and says, ‘This deaf chick is hot!'”

It was a whirlwind romance where the couple communicated by texts and body language. Tina kept up the charade, which was made easier when Chris went on a three-month fishing trip.

“It’s just an unspoken rule,” she said. “If your man is going out fishing, you don’t tell him any lies, secrets or nothing like that.”

It was tough to stay in character.

“If a door slams, you’ve got to not look,” she said. “If a dog barks, you have to be really careful not to look or anything. Cross the street and you have to pretend you can’t hear the horn honking at you.”

There were some advantages to faking deafness.

“In bed, it was a different story. I could be as loud as I wanted,” she said.