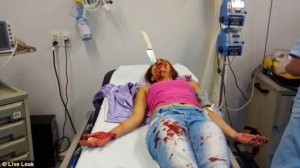 Brazilian woman who was stabbed through the forehead with a huge kitchen knife by her ex-boyfriend has miraculously survived .Police officers found 22-year-old Alcileide Rodrigues dos Santos with the knife still embedded several inches into her skull….

Despite the shocking nature of her injuries, Miss Santos remained perfectly calm throughout the ordeal and was able to explain to investigators exactly what happened, and even name her 19-year-old former boyfriend Roberto Martins dos Anjos as the alleged culprit.

Ms Santos said she was attacked by her former boyfriend at about 5pm on Tuesday, but did not reveal the nature of their argument, nor did she explain why it escalated so dramatically.
After being stabbed, the 22-year-old sought refuge on a nearby bench, where passing police officers noticed her covered in blood, with the large, white-handled knife still sticking out of her right eyebrow.Officers took her in their car for emergency first aid treatment at the nearby PM Central Police Station, before she was transferred by ambulance to the Hospital Estadual Mário Covas.
Unbelievably, despite the knife entering several inches into Ms Santos’ skull, it is not thought to have hit her brain, meaning the injuries – dramatic as they appeared – were purely superficial.
Now that Ms Santos is expected to make a full recovery, local police are turning their attention to investigating the case.