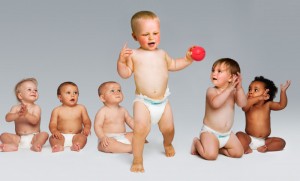 A mom’s decision to change her baby’s diaper on a dining table in the middle of a Chipotle restaurant is making headlines this week — and raising plenty of eyebrows in the process.

According to The Consumerist, the mom in question was having a meal with her 16-month-old daughter when the tot needed a diaper change. However, when the mom found that the establishment — the store was in the Midwest, the outlet states — didn’t have a changing table, she changed her child’s diaper on a table in the dining area.

The woman’s husband, Chad, reportedly sent a letter to Chipotle’s headquarters, defending his wife’s behavior and criticizing the restaurant’s employees for telling the family they’d have to leave if they tried to change another diaper in the dining area. In the letter, obtained by The Consumerist, he said that while his wife’s choice to change their baby on a dining table may have struck some as “unsavory,” the employees displayed an “inability/unwillingness to empathize with parents who find [the car] a less convenient alternative even on a beautiful day like yesterday, much less a subfreezing day as we undoubtedly will have in [this region] this winter.”

Chipotle responded to Chad’s letter by saying that they were “currently in the process of retrofitting locations with changing tables,” according to the outlet. In a written statement to The Huffington Post Tuesday, the company confirmed that it is “looking to incorporate [changing tables] into new restaurants that are in locations where we are likely to see a high concentration of families as customers.”

As Eater.com notes, this is the second time in recent weeks that a mom has made headlines for changing her baby’s diaper in the middle of an eatery.

In August, KHOU 11 News reported that a mom was kicked out of a Texas pizzeriaafter she changed her 4-month-old’s diaper at the table. The woman, who was at the restaurant with her baby and her two other children, said that the pizza place had no changing table and, according to the news outlet, she “didn’t want to take everyone back to the minivan to do the diaper change.”

This week, as news of the latest diaper changing debacle makes its rounds on the Interwebs, many parents and mom bloggers have expressed their horror at the idea of changing a child on a restaurant’s dining table.

“Introducing excrement into a dining area — even if it’s coming out of the cutest little body in the land — is a major health code violation,” wrote a blogger on MommyishTuesday. “It is simply not okay to do this. I don’t care if you have your parent-blinders on. Take them off. Dealing with the no-changing table situation is annoying, but it’s something most parents manage to navigate without changing their baby’s diaper next to someone else’s dinner.”

A blogger on The Stir concurred, writing: “Being that Chipotle seems like a restaurant on the more progressive side — and one with a kids’ menu — it is a little surprising that this particular location didn’t have a changing table in the bathroom. But, still, it’s no excuse to go Cro-Magnon on everyone. I mean, they were eating at Chipotle for god’s sake — how long does that take?”

Still, others have been more forgiving. In the comments section of The Stir, for example, one mom confessed to having changed her daughter’s diaper in the middle of a restaurant. “I was so mad that [somewhere] didn’t have a changing table,” she wrote. Another reader wrote, “I honestly don’t see [what] the big deal is.”