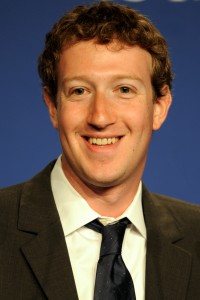 On his first visit to Facebook-crazy Indonesia, Mark Zuckerberg has met the president-elect, spread the word about his company’s global Internet-access initiative and posted a photo of himself at an ancient Buddhist temple.

The Facebook CEO arrived Sunday, when he climbed Borobudur temple in Central Java and posted a widely shared photo of himself atop its stupas on his Facebook page. On Monday he met Indonesian President-elect Joko Widodo, who used social media extensively in his campaign.

“It was a great conversation,” Zuckerberg said. “One of the big priorities that he communicated was growing jobs and growing the economy. I think that growing the Internet and connectivity is one of the best ways we can do that.”

The 30-year-old billionaire is travelling to help advance the Facebook-led project Internet.org.

“We are trying to get free basic services and affordable access to the two-thirds of (the world’s) people who aren’t on the Internet,” he said.

He added that while “obviously we want a lot of people to connect and use Facebook … Internet.org and connecting more people is not primarily to make money, especially in the near term.”

Indonesia is the world’s fourth-largest Facebook user. Facebook spokesman Andy Stone said there are 69 million active Facebook users every month, and 61 million of them are on mobile devices.

But the majority of Indonesia’s 252 million people do not have Internet access.

When asked at a press conference about his experience using the Internet in Indonesia, Zuckerberg said, “It works,” generating laughs in a country where many complain about Internet speeds.

“We hiked up this temple and it was beautiful and someone on our team … took a photo on his phone and uploaded it right after, and it went quickly, and now that photo is in a lot of places,” he said. “There are places where you travel around and you can’t do basic things like that.

“That’s obviously not the most important economic or cultural opportunity created by connectivity, but it was a good litmus test.”