Home National News Odd News 2 Kids Die In Fire While Mom Is In Hospital To Give...
Facebook
Twitter
WhatsApp 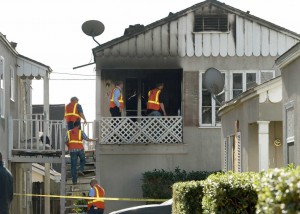 Police authorities in California has said A 6-year-old girl and her 2-year-old brother were killed in an apartment fire that also left their father severely injured, while their mother was in the hospital giving birth to a third child. AP was there:

The family had been living illegally in the San Bernardino apartment and were kicked out at least once before returning, fire officials said.

The man was taken to a hospital in critical condition Thursday with severe smoke inhalation and burns over most of his body, fire Battalion Chief Michael Bilheimer said.

The children’s mother had gone into labor and was taken to a hospital before the fire broke out. She had not given birth by Thursday afternoon and authorities were waiting to tell her about the tragedy, Bilheimer said.

The fire was reported shortly after 3 a.m. Thursday in an apartment built over a garage. A neighbor walking a dog spotted smoke spewing from the unit, which had no smoke detector, Bilheimer said.

The father could be heard shouting inside the burning, smoke-filled home, Nunez said.