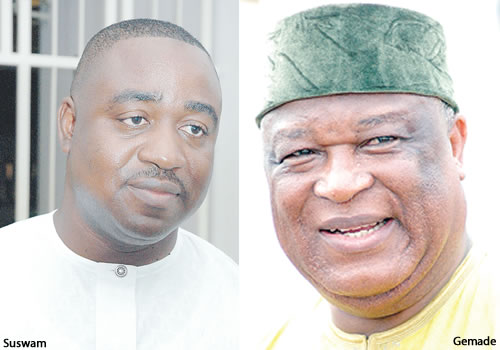 The member representing Benue North Senatorial District, Senator Barnabas Gemade, has denied the allegation that he was on warpath with the state governor, Gabriel Suswam, saying he was pursuing his re-election bid in a civil and democratic manner.

Gemade, who is a former National Chairman of the Peoples Democratic Party, PDP, and founding member of the party, made the clarification on Tuesday in Abuja, while reacting to a newspaper report that he was on a warpath with Governor Suswan.

Suswam, whose eight year tenure as governor of the ‘Food Basket’ state comes to an end in May 2015, is also vying for the PDP ticket to represent Benue North in the Senate.

Reacting to the newspaper report, the former PDP national chairman said he would not descend so low to engage in unwholesome activities, such as distributing fake delegates nomination forms, alleging that it was his main challenger, Governor Suswam, who wrote people’s names down as delegates in private houses, and was still shuffling names on all the electoral materials he commandeered, as he was not sure of what he expected from the people due to his unpopularity.

In a statement signed by his legislative aide, Bob Giga, the senator said he would not associate himself with anything that ran contrary to democratic norms, describing himself as “a personality that is humble, amiable, hardworking, God fearing, honest and a true Christian”.

He further said it was not in his character to aid, abet or support violence and thuggery, adding that there was no way he could be on war path or at daggers drawn with Governor Gabriel Suswam or any other person for that matter, over the picking of tickets under the PDP.

He said: “Senator Gemade has not, and will not engage in battle with anybody with regard to his election returning to the Senate in 2015.

“It is equally interesting to note that, the Ward Congresses of the Peoples Democratic Party of the 1st November, 2014, that were marred in all the Peoples Democratic Party controlled states is in public domain, as such all parties that were victims of the malpractice that was carried out on that day, petitioned to the National Working Committee of the PDP including Senator B. A. I. Gemade which is being looked into on its merits”.