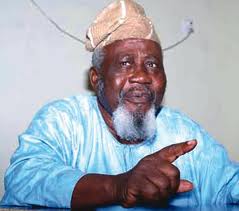 A former president of the Court of Appeal, Justice Mustapha Akanbi (retd), yesterday raised an alarm over the 2015 election, calling on Nigerians not to cease praying to avert the looming dangers ahead.

Akanbi spoke with newsmen in Ilorin, the Kwara State capital, after a special one year remembrance prayer for his late wife, Hajiya Munfaatu Aduke Akanbi.

The anniversary was marked with series of activities, including the opening of a mosque and an entrepreneurship centre in memory of the deceased.

The eminent jurist noted that the apparent desperation on the part of some politicians as demonstrated by the number of people vying for governorship positions, is a cause for concern.

The pioneer chairman of the Independent Corrupt Practices and other related offences Commission (ICPC), also called on anti-graft bodies not to allow themselves to be overwhelmed in the fight against corruption.

He said: “As a matter of fact, I have a feeling that 2015 maybe terrible for us, and we have engaged in series of prayers for Almighty God to save this country. People are not honest and committed, look at the number of people who want to be governors and president. The reason you see people contesting gubernatorial election is because they go there to make money. Nobody has held this high office and remained poor. The state may not develop or grow economically or otherwise, but the individual who goes there, if you are in the state, you will see the houses they are building. The house that should take them 20 years to build, would be built in one year.

“People feel politics is the easiest way to make money. You can make your salary in a day while in political office. This is a terrible thing. May God help us”, he prayed.