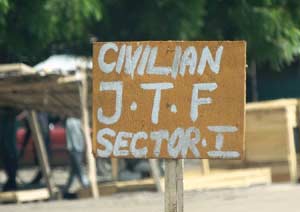 No fewer than 30 suspected members of Boko Haram were Thursday killed by the Civilian JTF in Gubio Local Government Area of Borno State.

This came as Boko Haram members attempted to lay siege on the Borno town. Five members of the Civilian JTF were said to have sustained minor injuries.

Mobbar was under the control of Boko Haram after they invaded the area last Monday, leaving several people dead, with thousands of residents displaced, reports Vanguard, citing sources.

Gunmen in Hilux vehicles and motorcycles were said to have been sighted at Kareto by some good Samaritans. The youths from Gubio and Kareto therefore mobilized and confronted the sect, killing 30 of them. Several others however escaped into the bush with severe injuries.

Spokesman of Borno Elders Forum, Engineer Bulama Gubio confirmed the exploit of the Civilian JTF. He said: “There was huge success as 30 members of Boko Haram, who attempted to overrun Kareto, Gubio and other surrounding communities were killed by our youths.

He said normal activities have returned to the now calm area.