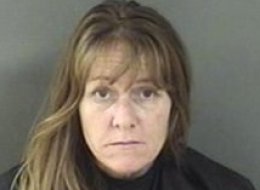 A 43-year-old woman who was arrested Saturday tried to fool Police officers by passing herself off as her daughter got busted and guess what she said, she said she was suffering from a strange “Age acceleration disease.” Read more from HuffongtonPost:

Jennifer Crosby, 43, allegedly told a deputy at a traffic stop in Indian River County that she was only 22 and “has a medical condition that makes her age faster.” According to an arrest report obtained by The Smoking Gun, Crosby was pulled over for inoperable tail lights, and when deputy Colby Smith asked for her license, she said she had forgotten it.

Crosby then allegedly gave Smith the wrong name and a 1992 birthdate. Smith wrote that when he appeared skeptical of the birthdate, Crosby made the outlandish claim about accelerated aging.

When the deputy looked up the name Crosby gave him and discovered the woman was not Crosby, he writes that Crosby admitted she had just provided her daughter’s name and birthdate because her own license was suspended. The progeria-free woman was arrested on charges of providing a false name and driving with a suspended license.