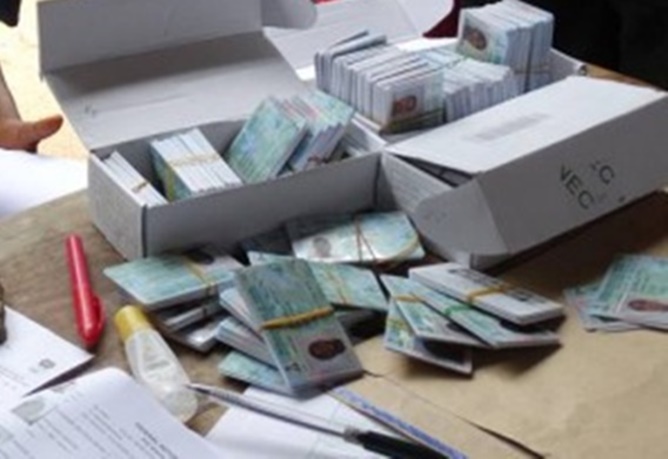 The Independent National Electoral Commission, INEC, said on Thursday it would work with security agencies to recover the missing 5,000 Permanent Voter Cards, PVCs, in Edo State.

The Chief Press Secretary to INEC Chairman, Kayode Idowu, said in Abuja that the commission would do everything to ensure that affected people were not disenfranchised.

“Usually, those are security issues and INEC collaborates with security agencies. It happened in some states in the past and the cards were recovered.

“I am sure that this will not be an exception. These cards will be recovered”.

Mr. Idowu urged those who stole the cards to return them as the cards could not be useful to anybody other than the original owners.

“These cards will be useless to anybody who has stolen them. Old habits die hard, that is the problem.

“Under the dispensation, the worst that can happen is if you get another person’s card, is preventing that person from voting. That card is not useful.

“When you go to the election on the day it will be swiped; the data that is embedded will pop-up on the screen. Then you take your finger print, you will cross match it will be the one that is in the card and it has to match.

“So, if you take somebody’s card your finger print cannot be the same and if you cross match it, it wouldn’t match and the machine will tell you ‘not verified’”.

He said that there were strict audit procedures put in place by the commission for the distribution of permanent voter cards.

Mr. Idowu said for any card to be issued, the person releasing it would make sure that the name and picture of the collector were in the register to ensure that it was collected by the original owner.

“The owner will also handover his temporary voter card before he will be given the PVC.

“He will also sign the collection form which is like another register with his picture on it”, he said.

Mr. Idowu said the suspension of the creation of additional polling units would not affect the credible conduct of 2015 general elections.

“The commission is going ahead with other procedures. We are going to use voting points that we used in 2011. So, voting polling points will be created as will be necessary.

“You will have seen in the past, polling units in open places, on the open fields, under the sun and all that and that is not the best practice.

“So the commission will be relocating polling units to enclosures. Polling units in front of private homes will be moved away.

He, however, advised all stakeholders to engage INEC’s electoral processes with honest intention as well as contribute to the objective of conducting credible elections in 2015.

“If everybody engages the process with honesty, it will be easy to achieve the set goal of having an election that can be comparable to any election anywhere in the world, even in advanced democracy.

“If there are honest intentions, attitudinal issues will be dealt with”, Mr. Idowu said. (NAN)