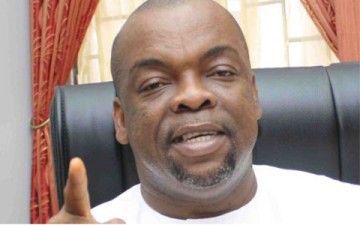 The immediate past Minister of Labour and Productivity, Chief Emeka Wogu, has denied withdrawing from the Abia governorship race, saying he is still very much in contention for the coveted seat.

Speaking to newsmen at his residence in Aba, Chief Wogu said he is serious about vying for the governorship of the state and hopes to win in 2015.

“I’ve not quit from the race and I know I will be elected guber candidate come December 11, 2014”, he said.

The former minister denied knowledge of Governor Theodore Orji’s preference for a particular candidate amid speculations that he (the governor) had endorsed Okezie Ikpeazu as his successor.

Wogu vowed to remain in the PDP even if his desire to clinch the party’s ticket does not materialize.

“I will not quit the party under any circumstances and I believe that the process will be straightforward and not hijacked”.

He explained that his confidence stemmed from the assurance of President Goodluck Jonathan of a level playing field for all candidates as witnessed recently in Ekiti and Osun States.

He said the people should not worry about the state of Aba roads and the general infrastructural decay because ‘the true Aba man’ will fix them and raise the environmental cleanliness of the city.

Wogu, who said he was in the race because of the encouragement he has got from people of his senatorial zone including traditional rulers, noted that none of the other aspirants had better credentials and experience than him for the position having served at various times as a local government chairman, political adviser, Abia Representative in the board of Revenue Mobilisation, Allocation and Fiscal Commission and minister.