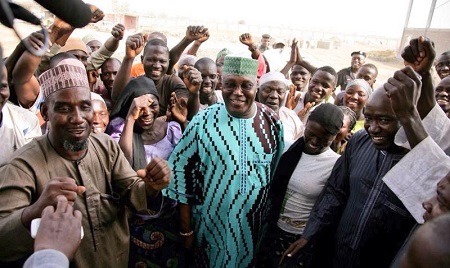 Former Vice-President Atiku Abubakar has been endorsed by the Adamawa All Progressives Congress executive members and the 21 local government chairmen for the 2015 presidential election.

The endorsement came on the heels of the former vice president’s submission of his expression of interest and nomination forms for the 2015 presidential election to the National Secretariat of the APC in Abuja yesterday.

The Adamawa APC executives, led by Binta Masi-Garba, who declared their support for Mr. Abubakar’s bid at a news conference in Yola on Monday, lauded the presidential aspirant’s philanthropy and social obligations.

“His marriage and business ties cut across tribe and tongue, as do his philanthropy and social obligations. Sadly, in the deeply-divided Nigeria we have today, few politicians can make such a claim”, Binta said.

She continued: “We are proud of the outstanding leadership role Atiku Abubakar has played in this country over the past 15 years of democracy, both within and outside government.

“He has consistently lent his voice to pressing national issues, offering counsel to the Federal Government.

“Without the least meaning to diminish his national and global stature, it is on the records that Atiku, as an individual, has done more to develop Adamawa State than any indigene of the state that is living or dead”.

She said next to the Adamawa State Government, Mr. Abubakar ranked as the highest employer of labour through his many businesses and industrial establishments.

She said the people were thrilled by his commitment to job creation, improving the economy, education, infrastructure, transparency in government and the overall welfare of Nigerians.

“It is on this note that the entire members of the State Executive Committee are all here.

“We are supported by the party’s chairmen in all the local government areas representing the APC in Adamawa State, and hereby endorse the Turakin Adamawa for the 2015 presidential elections.

“Following a meeting of the party executives yesterday (Sunday) evening, we unanimously resolved that we will give him our full backing towards realising his ambitions to create a Nigeria for all”, Garba said.

She also said the party believed in democracy and was open to other people’s candidacy, hence would not endorse a consensus candidacy.