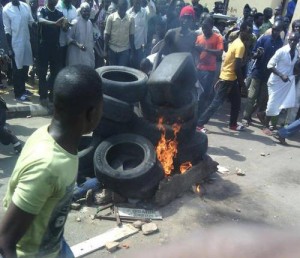 Residents of northern states that have suffered Boko Haram attacks are increasingly taking the security of their communities into their own hands, as a mob Tuesday beat a suspected terrorist carrying explosives, to death.

The suspect was said to have been stopped at a bus station in Gombe, capital city of Gombe State, where at least eight people were killed in a series of blasts last month.

“There was a scuffle. He was overpowered by the onlookers who pounced on him in order to assist in making sure his bag was searched,” Vanguard quoted State Police Commissioner Abdullahi Kudu as telling reporters.

He noted that the action of the mob was not really smart as the suspect had a remote and could have detonated the explosive. The remote was however recovered, as well as the explosives, which were kept safe by a bomb disposal team.