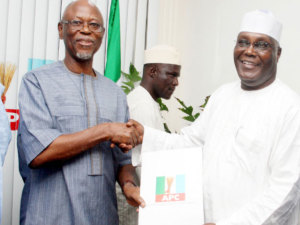 Former Vice President and presidential aspirant of the All Progressives Congress, Atiku Abubakar, has stated that it is ‘too late’ for the APC to adopt a consensus candidate for next year’s presidential election.

Mr. Abubakar stated this while speaking to journalists in Bauchi on Sunday.

He said: “Consensus is an idea from PDP and it is over; we are all waiting for primaries to hold and whoever wins the primaries we will all follow and support him”.

According to him, it is one of the tenets of best practices in democracy for candidates to be allowed to test their popularity in primary elections.

Commenting on his relationship with his former boss, Chief Olusegun Obasanjo, Mr. Abubakar said they have a good relationship.

“In spite of my disagreement with Obasanjo on political ground, there is personal cordial relationship between us; I visited him last week at his Ota Farm”, he said.

The Turakin Adamawa, who has been traversing the length and breadth of Nigeria in pursuance of his ambition, held a closed-door meeting with APC stakeholders in Bauchi ahead of the December 10 presidential primary of the APC.

Apart from Mr. Abubakar, other aspirants who have indicated interest to run for president on the platform of the party are Gen. Muhammadu Buhari (retd), Sam Nda-Isiah, Governors Rabiu Kwankwaso (Kano) and Rochas Okorocha (Imo), and Speaker Aminu Tambuwal.