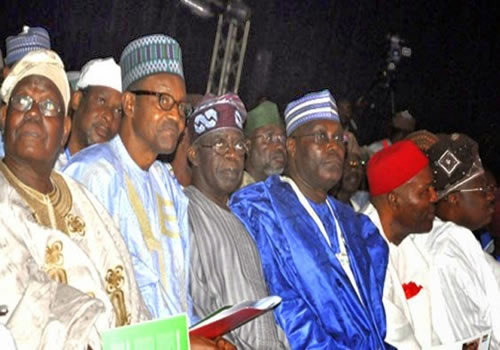 APC, which has four presidential candidates so far, is going to pick its flag bearer for the 2015 presidential poll during the national convention in Abuja.

The revised time table has also indicated changes to the schedule of the governorship primaries in the states, where the new date is December 2, in contrast to the earlier announced date of November 15.

The new tame table, jointly signed by the party’s National Organising Secretary, Osita Izunaso and the publicity secretary, Lai Mohammed, also indicated that screening of presidential aspirants will commence from November 17 and will last till November 19.

The party will hear appeals relating to the screening of presidential candidates from November 20 to November 21.

However, the dates for the primary election into the National Assembly’s senate and House of Representatives have remained unchanged, with primaries for senators still scheduled to hold on November 29, and that of the House to hold November 24.

Screenings into the two National Assembly offices take place for senatorial aspirants from November 22 to 25, while November 17 to 19 has been fixed as date for the screening of House of Representatives aspirants.

Appeals of the National Assembly primaries, according to the revised time table, would hold from December 1 to 2 for the senate, while November 25 to 26 has been reserved for appeals by House of Representatives aspirants.