Beauty queens: Ariana Grande and Jourdan Dunn were the leaders of a fashionable pack of stars on the red carpet at the MTV EMAs  at Glasgow’s SSE Arena on Sunday night, with both of them flashing a sizable amount of cleavage
The stars were out in force for the MTV European Music Awards on Sunday night, held at Glasgow’s SSE Arena.
Ariana Grande and Jourdan Dunn went all-out with their ensembles as they led the way on the fashionable red carpet at the start of the evening, both of them wearing alluring cleavage revealing dresses.
Ariana, who was one of the first big-name stars to arrive, sported a stylish frock with a cut-out detail over her chest and on her sides, revealing a flash of a sideboob, as well as her lean, toned arms.

The American pop star, who was nominated for a handful of EMAs – including Best Song for her mega-hit Problem – showed no sign of being tired, as the night before the awards she tweeted that she was suffering from a touch of insomnia.
‘Caaaan’t sleep,’ the 21-year-old posted on Twitter, hinting at possible pre-show nerves.
The stunning hitmaker wore her long, glossy locks down, cascading over her shoulders, mixing it up from her usual high ponytail hairstyle that she has become famous for. 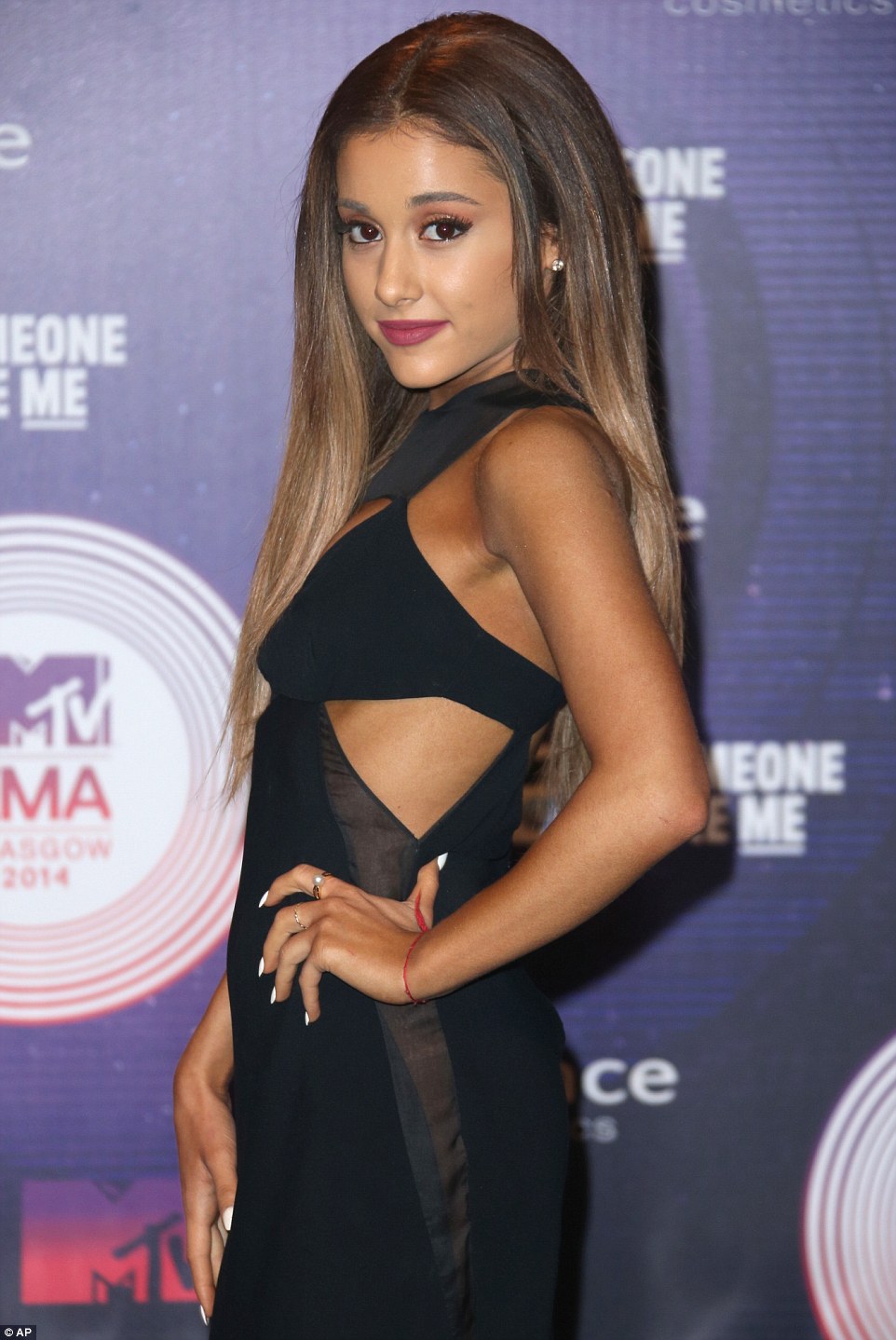 ‘I feel so naked!’: On the red carpet, Ariana revealed that wearing her hair down made her feel rather exposed
She wore a slick of muted pink on her lips and a subtle bronze shadow on her eyelids, and minimal jewellery, letting the cleavage-baring dress speak for itself.
Model Jourdan Dunn – who had been seen arriving in the city earlier in the day – positively wowed on the red carpet in a revealing little white dress.
The 24-year-old model’s white frock had a very deep plunging V-neck that skimmed over her navel, revealing her ample cleavage that rested above a silver bar across the gap.
The mother-of-one glowed as she smouldered for the cameras, her bob hairstyle coiffed into a neat and glossy style with loose waves. 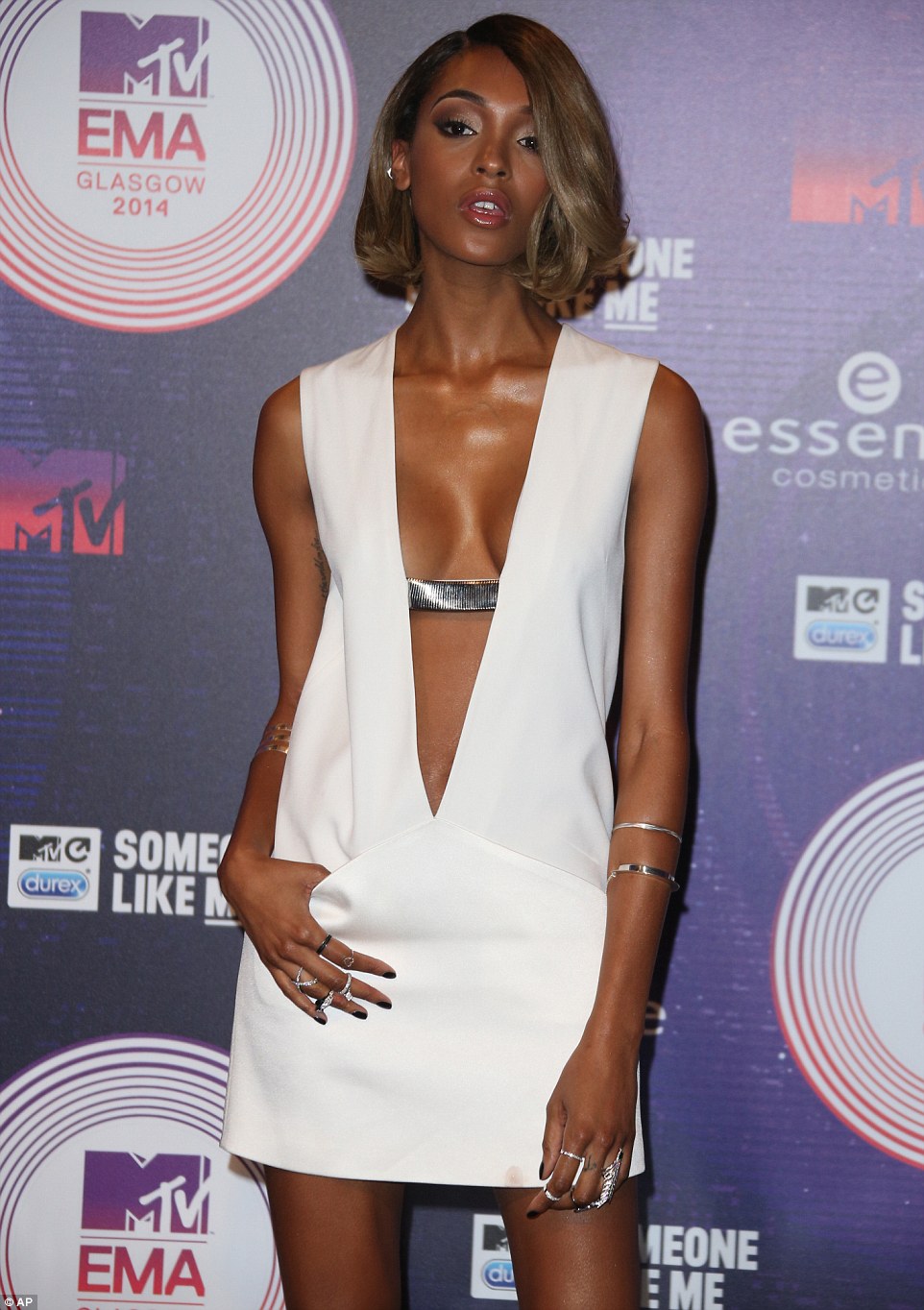 Ample assets: The 24-year-old Brit beauty displayed her enviable figure in the barely-there frock, while covering her arms and hands with silver jewellery 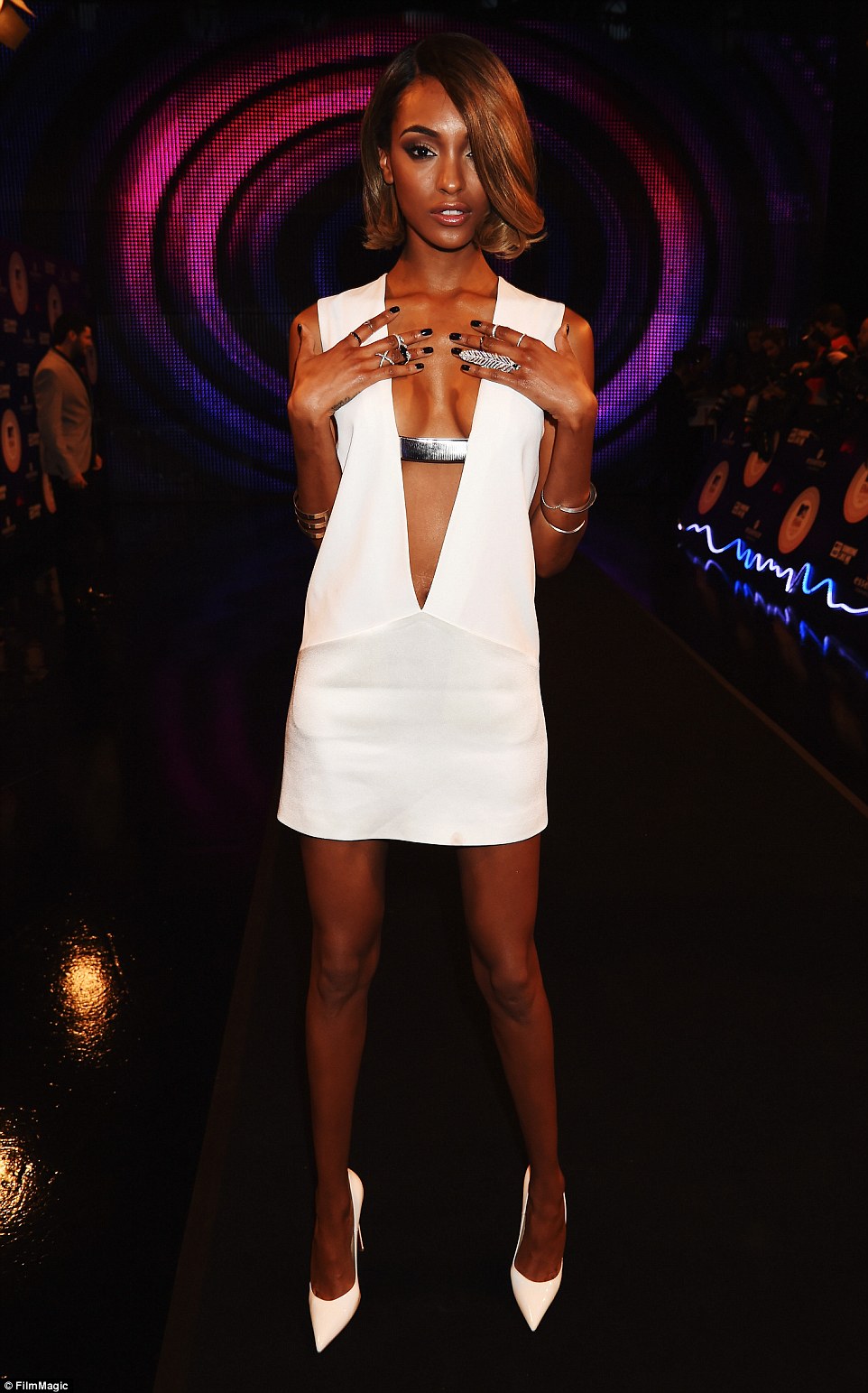 Showing off: Jourdan drew attention to her decorated hands as she worked the red carpet into a frenzy
The British beauty teamed her all-white look with lashings of mascara on her almond-shaped eyes, with her elegant arms and hands bedecked in silver items of jewellery.
She also made sure her white look went from head to toe, as she wore white pointed court shoes to finish it off.
Perhaps the most striking part of her look, though, were her seemingly endless legs that looked even longer with the super-short cut of the mini dress.
Singer and TV star Alesha Dixon looked quirky and cute in her unique printed dress, that had a navy pinstripe background and a multicoloured design emblazoned across the front, with a penguin taking centre stage on the garment.
The frock was cut in a trapeze-style, keeping her slender curves well-hidden, but she managed to flashed her enviable legs.
She finished off her eclectic look with slicked-back hair, a glossy berry shade on her lips and intricately decorated black sandals. 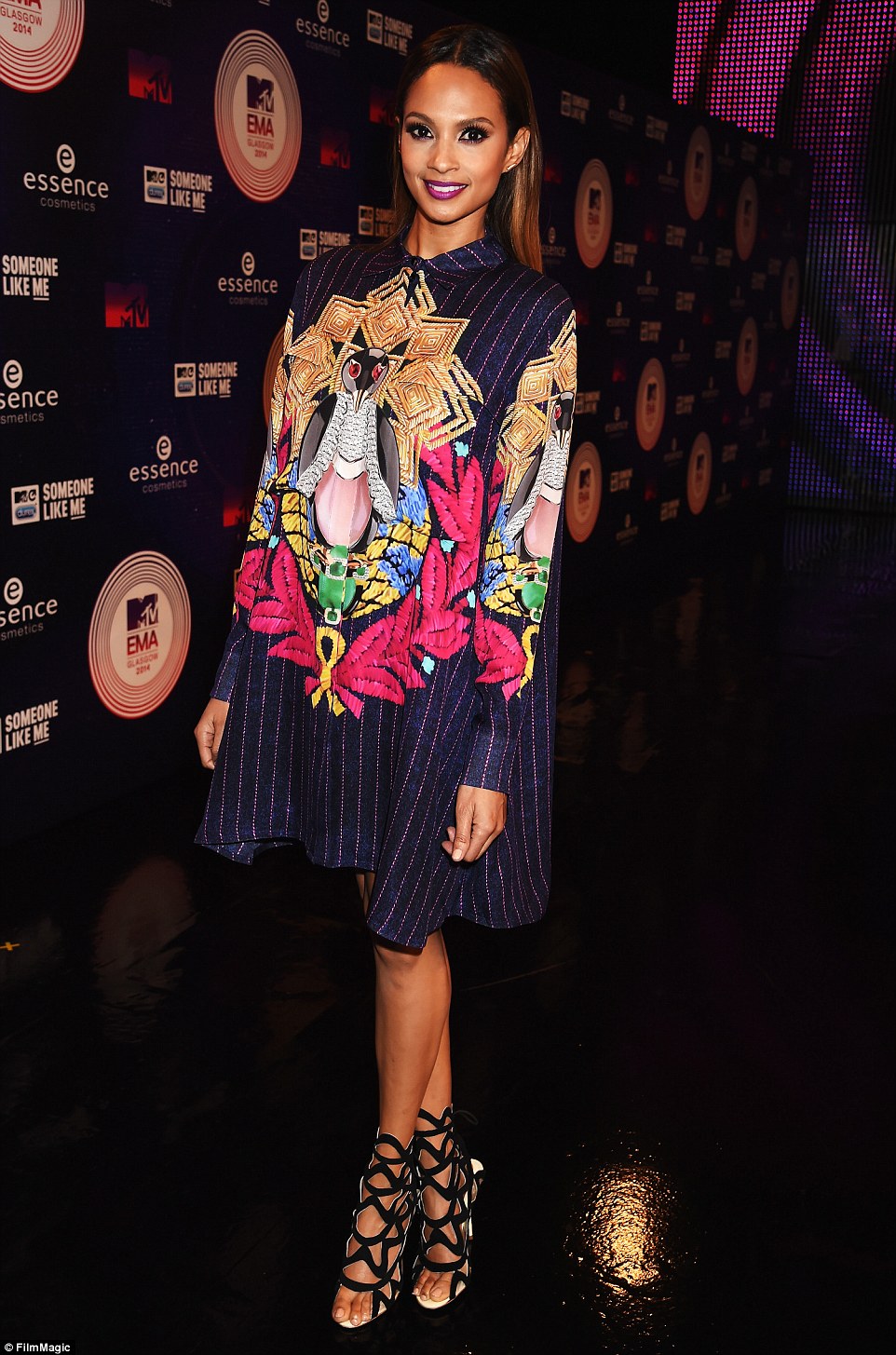 Eclectic: Alesha Dixon sported a unique and stylish pin-stripe and penguin-adorned dress, as she flashed her impressive pins 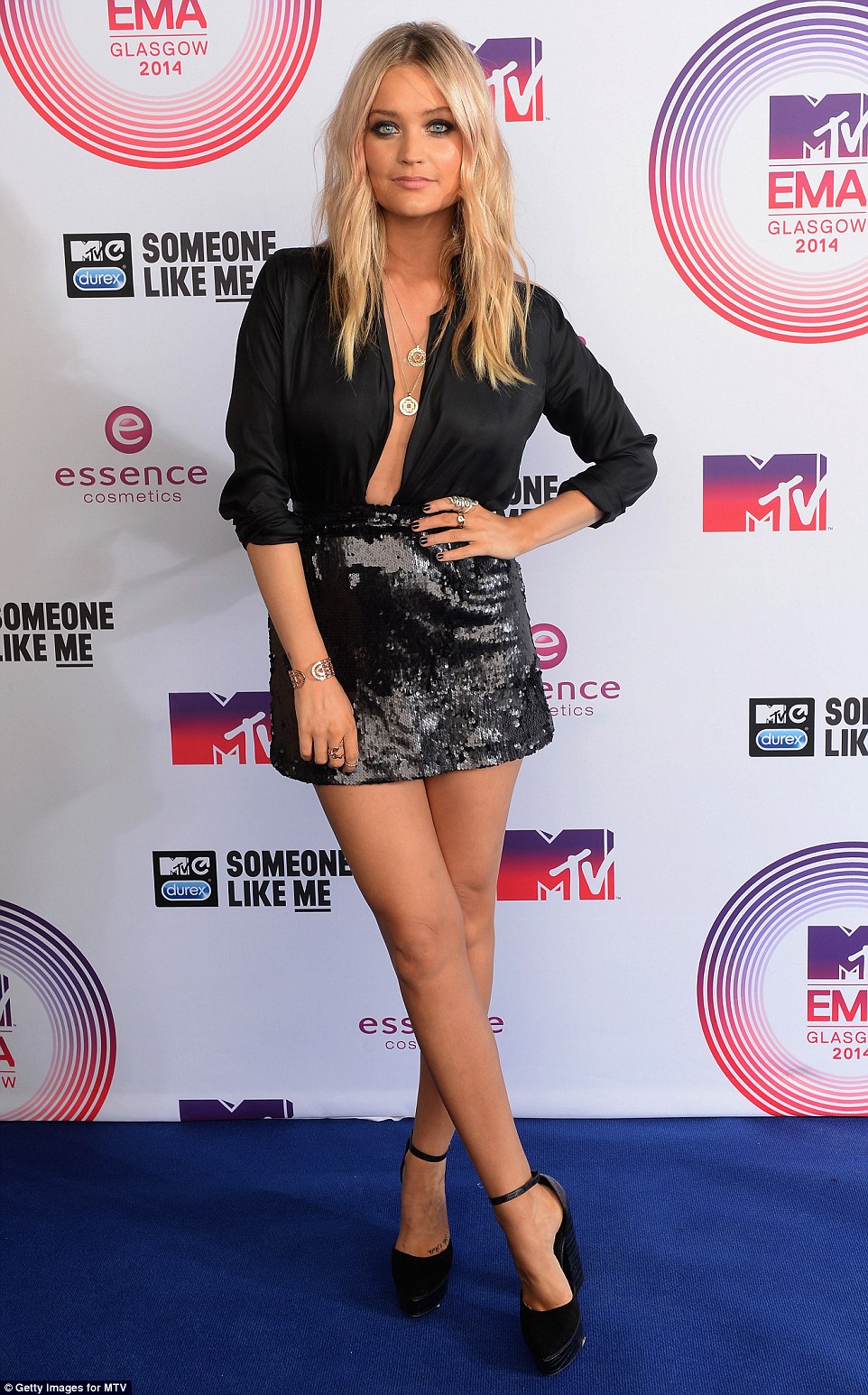 Revealing: MTV presenter Laura Whitmore went for a daring look, that included an undone blouse tucked into a sequinned mini-skirt, revealing her cleavage and toned torso
MTV presenter Laura Whitmore worked the red carpet along with fellow presenter Sway Calloway ahead of the show, sporting a stunning black outfit that revealed quite a lot of skin.
The brave star teamed an unbuttoned black blouse with a sequinned black mini skirt, that showed off her decolletage and a racy bit of sideboob.
Wearing her blonde locks down in a slightly mussed-up style, she also added a couple of gold necklaces to her ensemble, that drew attention to her bare cleavage.
Her legs looked endless in the super-short skirt, and she finished the look with towering black heels with a dainty ankle strap. 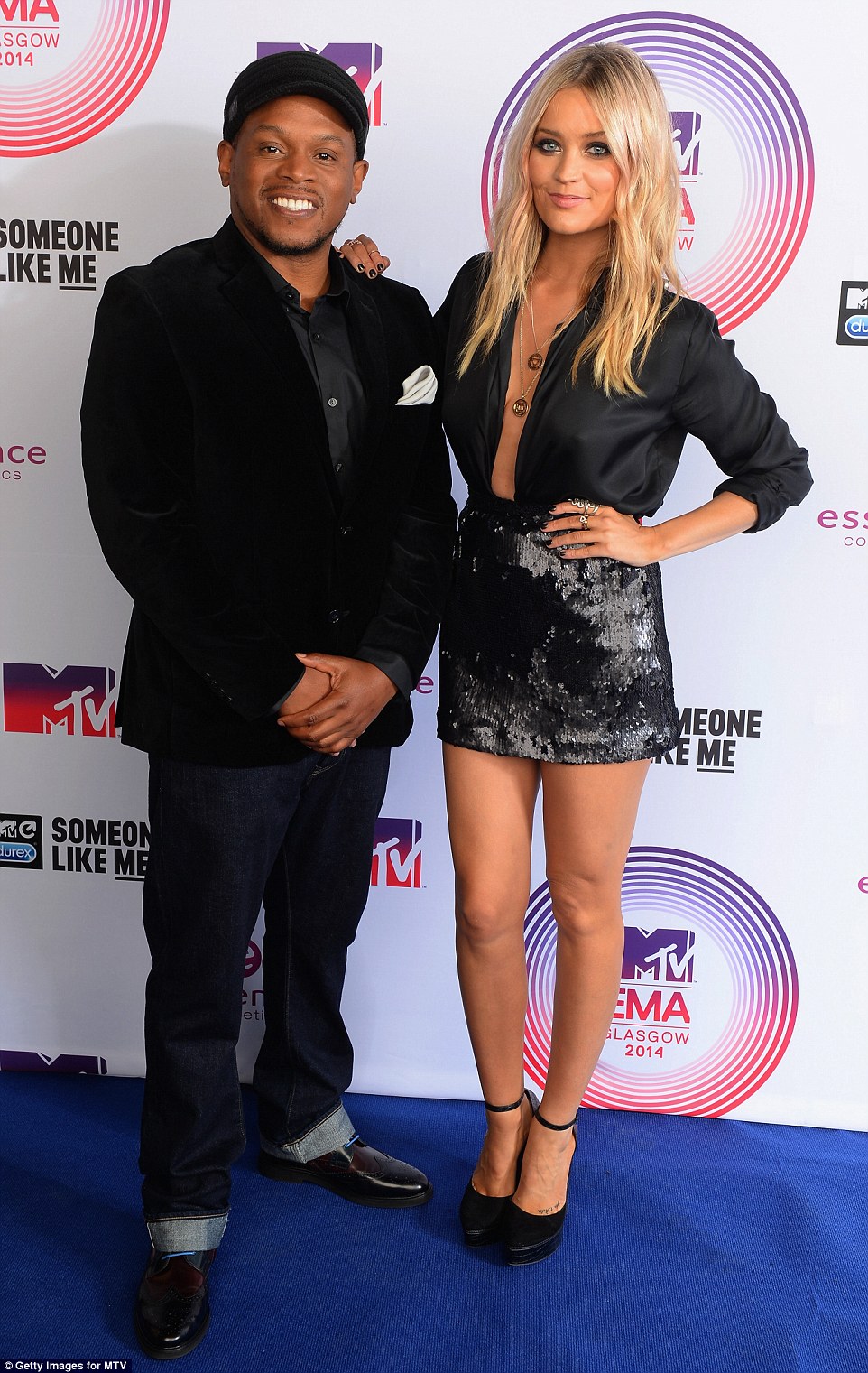 Hosts with the most: Laura Whitmore posed with Sway Calloway on the red carpet at the MTV EMAs

No Hideaway here: MTV EMA nominee Kiesza opted for an eye-popping multicoloured dress that included a feathered short skirt and straps across the front and back
Singer Kiesza stole the show in her multicoloured, strap-laden frock that included a feathery mini-skirt, showing her legs off.
The 25-year-old Canadian, who is nominated for Best New Act styled her hair in an intricate plaited updo, that she revealed when turning around on the red carpet.
The Hideaway hitmaker completed her get-up with strappy tan, black and white high heeled sandals, and a flash of scarlet lipstick.
Meanwhile, soon-to-be ex-Geordie Shore star Vicky Pattison went all-out with a showstopping floor-length gown, that wouldn’t have looked out of place on the red carpet at a major movie awards ceremony.
Although the reality TV star cut a striking figure the glittery gown covered in sheer panels, she admitted to MailOnline on the red carpet that she was struggling with the skirt, as she kept getting her heels caught in the hem.
‘I’m having a bit of a wardrobe malfunction at the moment!’ she said, adding that the backless item was from retailer Miss Francesca. 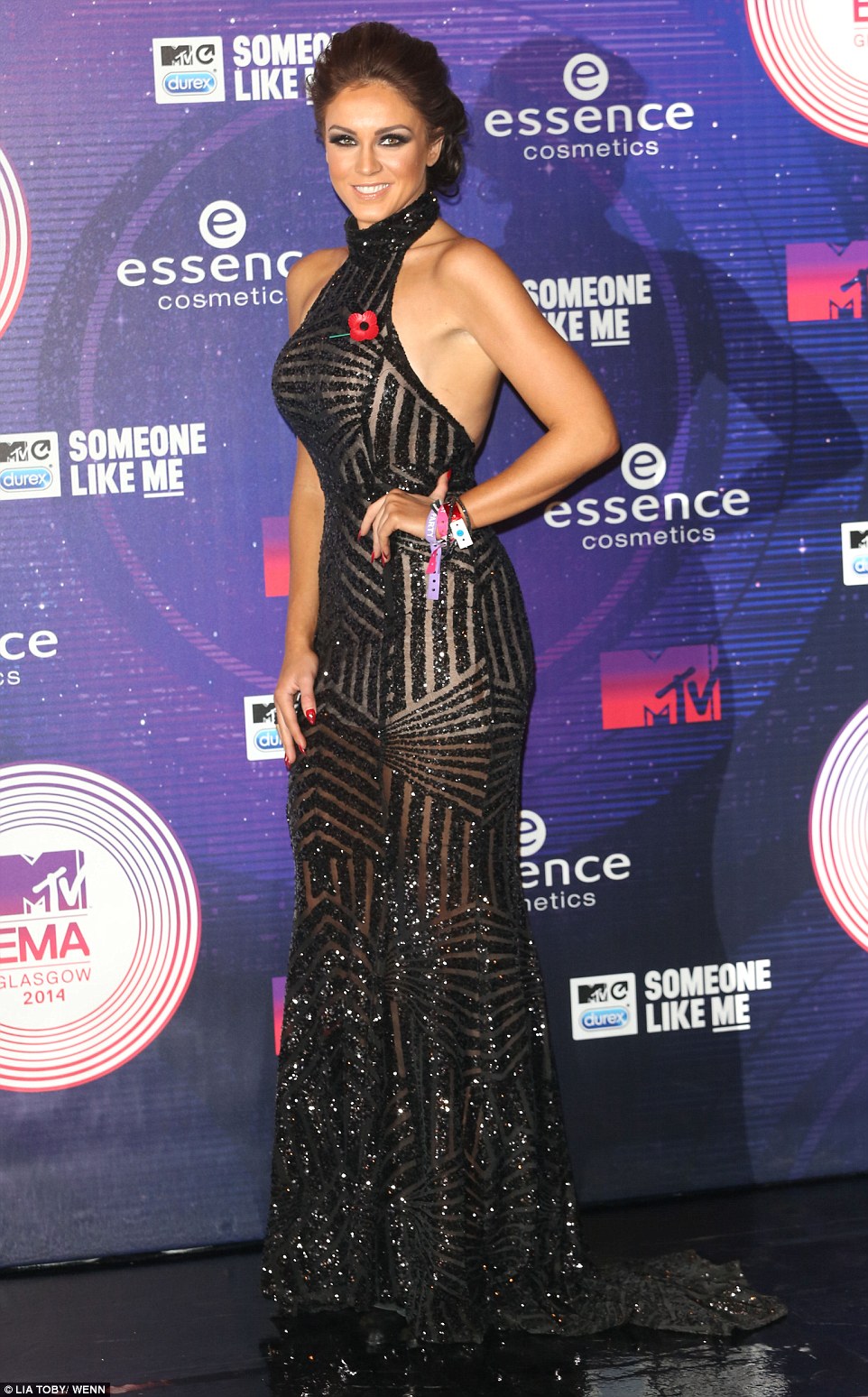 Wardrobe malfunction: Reality TV star Vicky Pattison wowed in her floor-length sheer panel gown, but admitted she was having problems walking in it 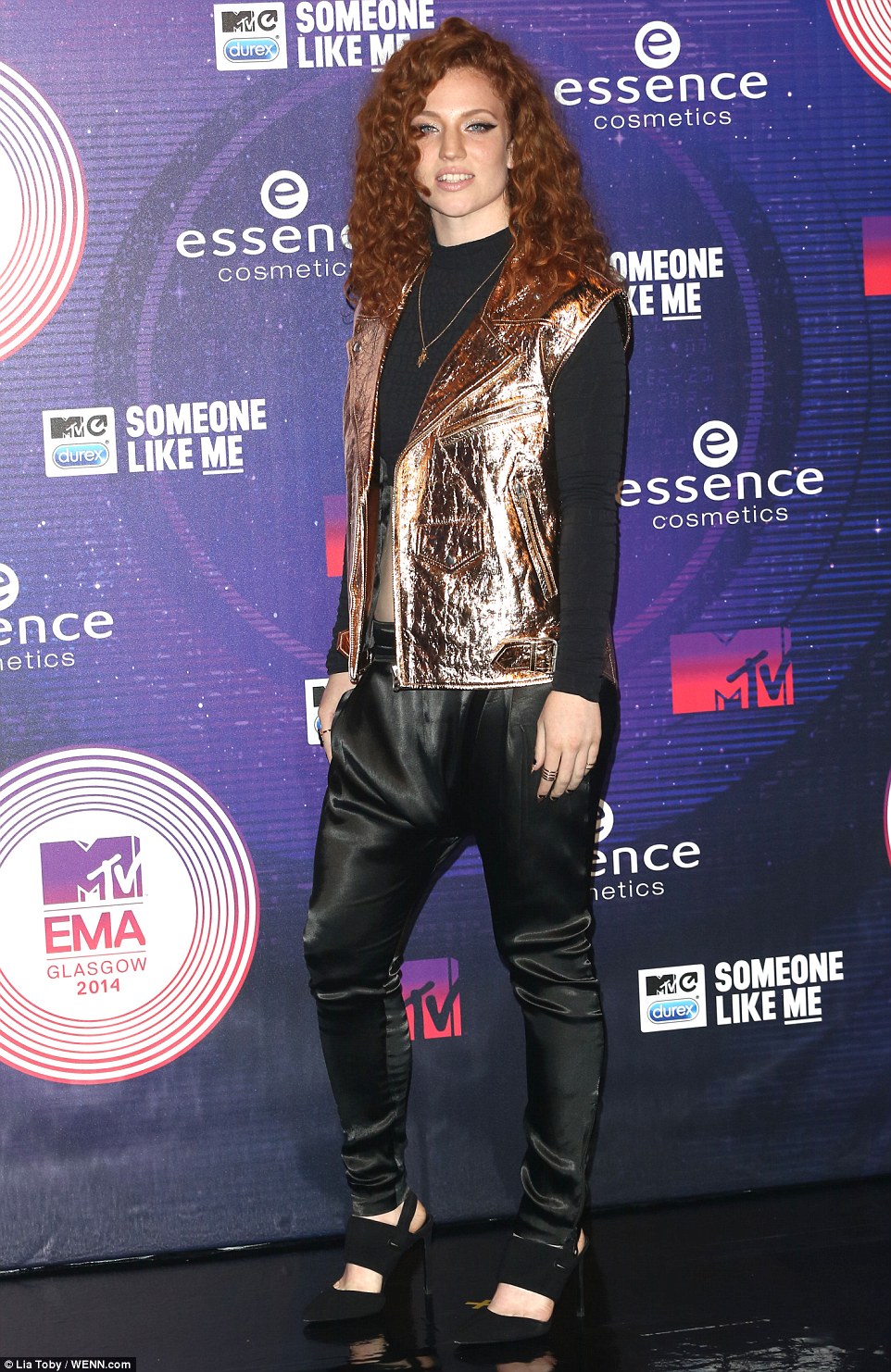 Self-styled: Singer Jess Glynne wore a unique ensemble of Alexander Wang bottoms and an Alexander McQueen top, that she organised herself
Singer Jess Glynne, who is best known for her impressive vocals on Route 94’s My Love and Clean Bandit’s Rather Be, rocked up to the event wearing Alexander Wang trousers and an Alexander McQueen top, that she styled herself.
She teamed her high-fashion yet casual look with smart black pointed heels, and a metallic bronze sleeveless jacket.
Scottish singer Emeli Sande revealed a new hairstyle, reminiscent of superstar Beyonce’s, featuring a short blonde fringe with her tresses piled up high on her head in a chic bun.
She teamed a simple mid-length white strappy dress with a sheer burgundy kimono, and added a touch of bling with a large, ornate gold necklace.
The popular singer revealed that she’s in the midst of preparing a new album, a follow-up to her successful 2012 record Our Version Of Events.
‘The new album is going really well, expect it to be released next year,’ she said. 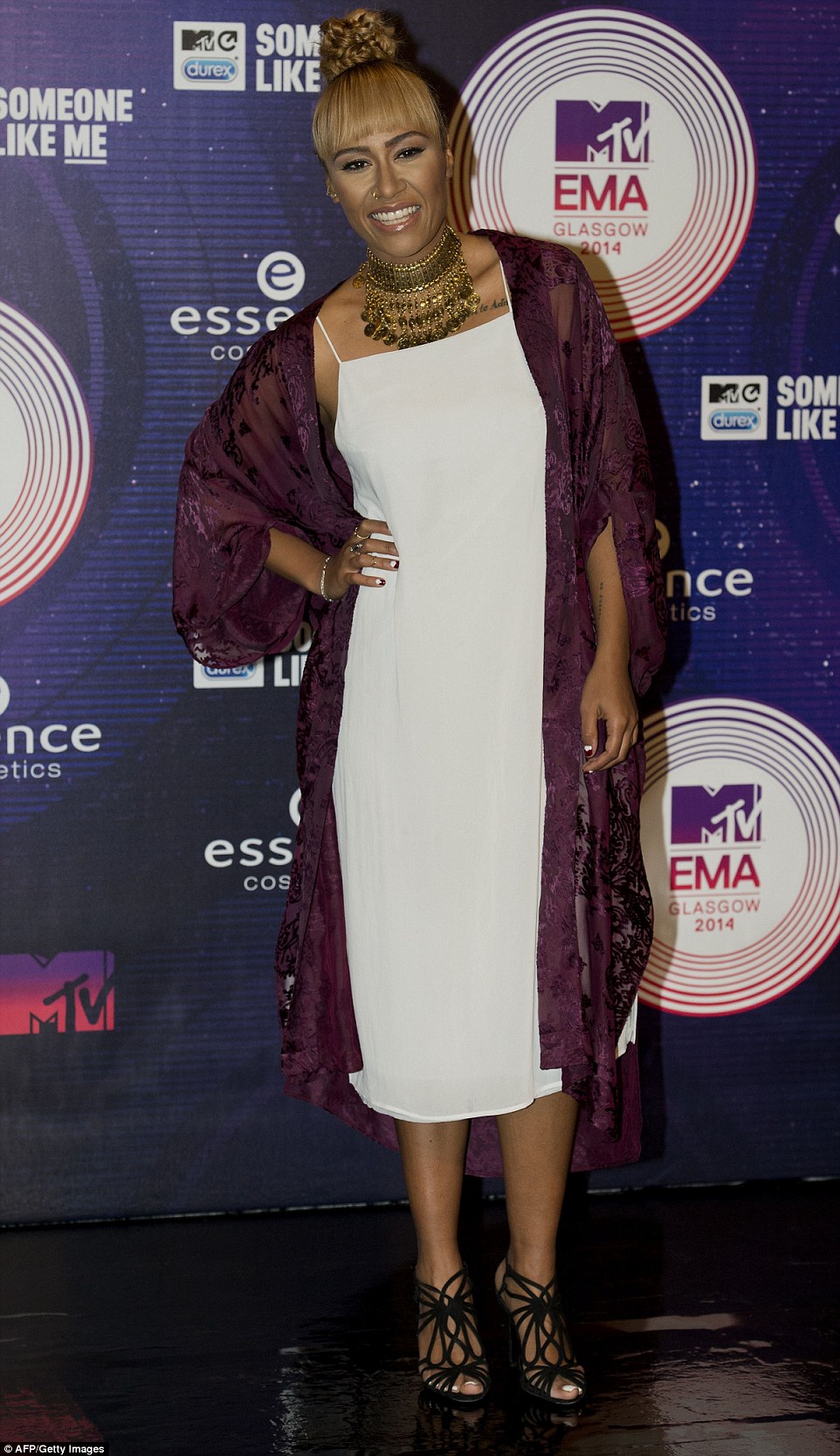 Chic and tidy: Singer Emeli Sande looked beautiful in a white dress and burgundy kimono, finishing her look with a Beyonce-inspired hairstyle 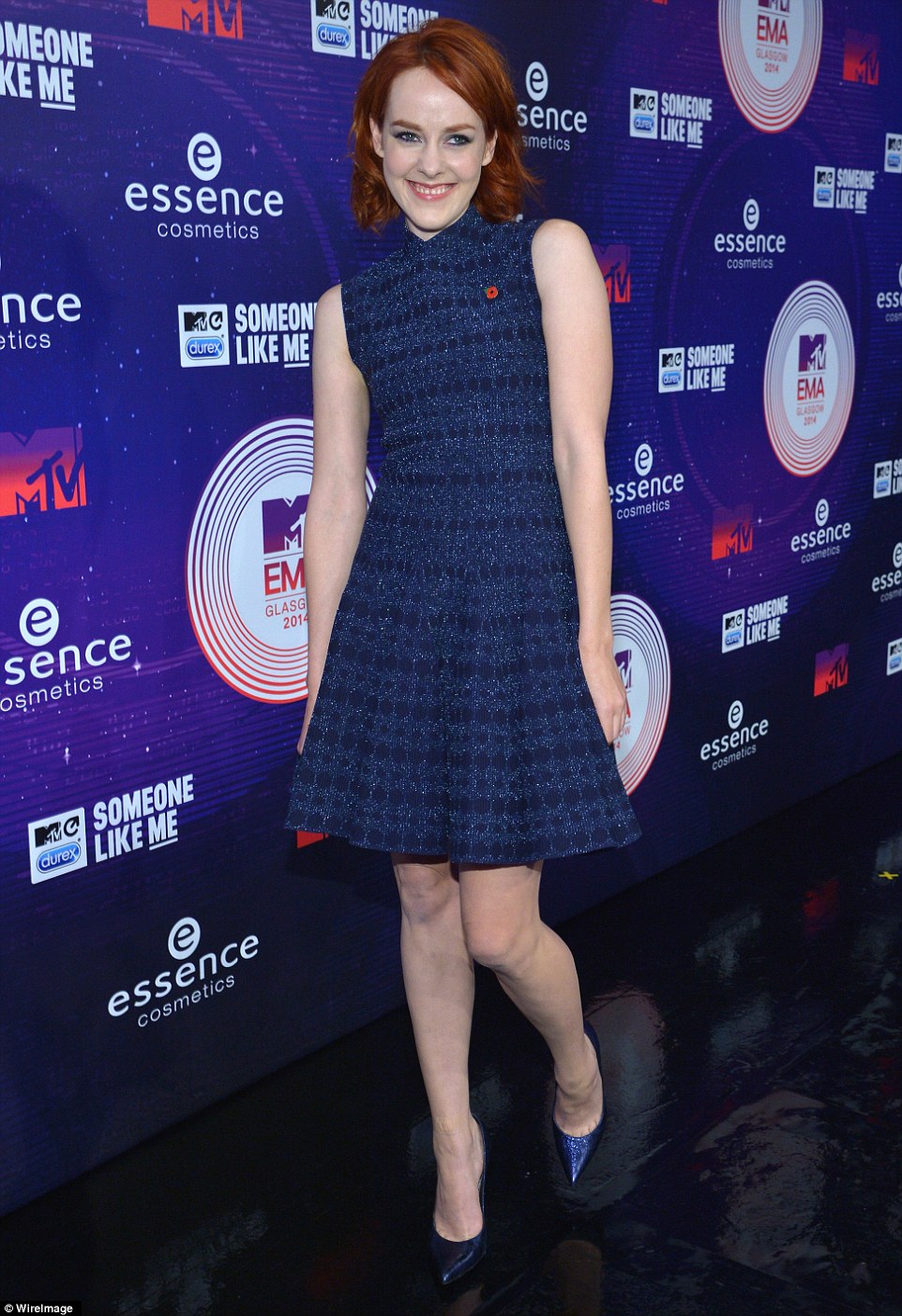 Cute combo: Jena Malone worked an all-blue outfit with her striking red hair, as she posed on the red carpet at the EMAs
Game of Thrones and Hunger Games: Catching Fire actress Jena Malone was also in attendance to give her support to the stars of the music world.
She opted for a blue high-necked dress with a cute A-line flirty skirt, that appeared to have a glittery effect all over it. She finished the look with metallic blue heels, and the whole ensemble worked flawlessly with her striking red hair.
Man of the moment Ozzy Osbourne – who has been named this year’s winner of the Global Icon Award – rocked up on the red carpet with wife Sharon by his side.
The cheeky rocker admitted that he had no idea who the host of the evening – Nicki Minaj – is.
He said on the red carpet: ‘Nicki Minaj is presenting tonight. I’ve never heard of her,’ before adding that winning the award is a ‘huge honour’. 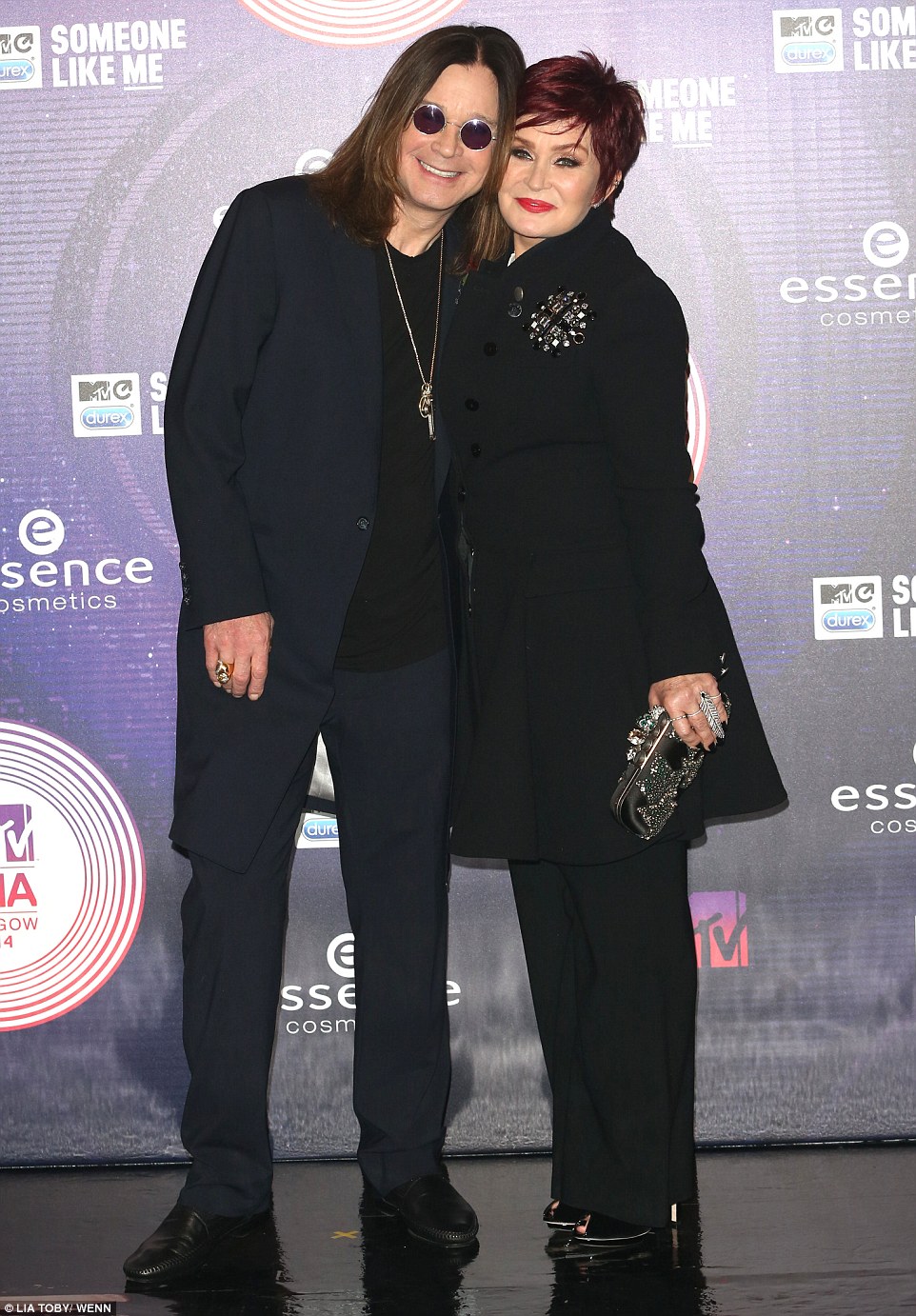 Happy couple: Ozzy and Sharon Osbourne arrived at the EMAs and looked more loved-up than ever, as award-winner Ozzy revealed he had never heard of the show’s presenter Nicki Minaj 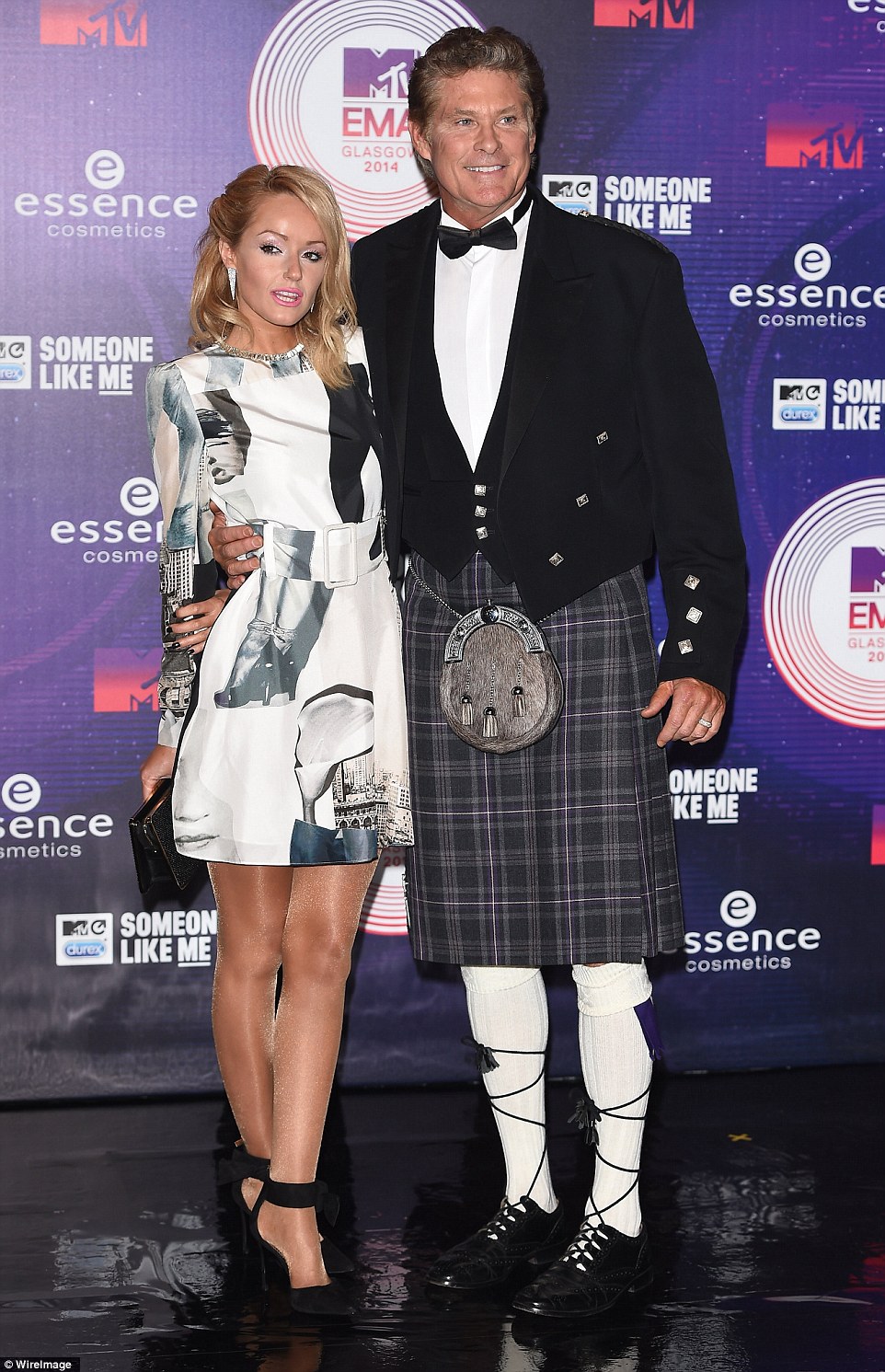 Kilted and booted: David Hasselhoff wore a kilt in honour of the EMAs’ location, as his girlfriend Hayley Roberts claimed it was ‘the best outfit I’ve seen him in’
Iconic actor and singer David Hasselhoff was also in attendance at the awards ceremony, and paid respect to the show’s location by wearing a kilt and sporran.
His girlfriend Hayley Roberts said she adored his outfit.
‘It’s the best outfit I’ve seen him in,’ she told MailOnline on the red carpet.
Singer and EMA performer Charli XCX opted for a ladylike ensemble: a sequin covered two-piece black and white outfit – a skirt and cardigan – that she tied together with pom-pom heels and a dainty white handbag.
And LMFAO star Redfoo got lots of cheers as he worked the red carpet, arriving in a Scottish-inspired kilt.
Nominee Ed Sheeran was happy to pose on the red carpet and he also took selfies with his fans, while signing autographs too. 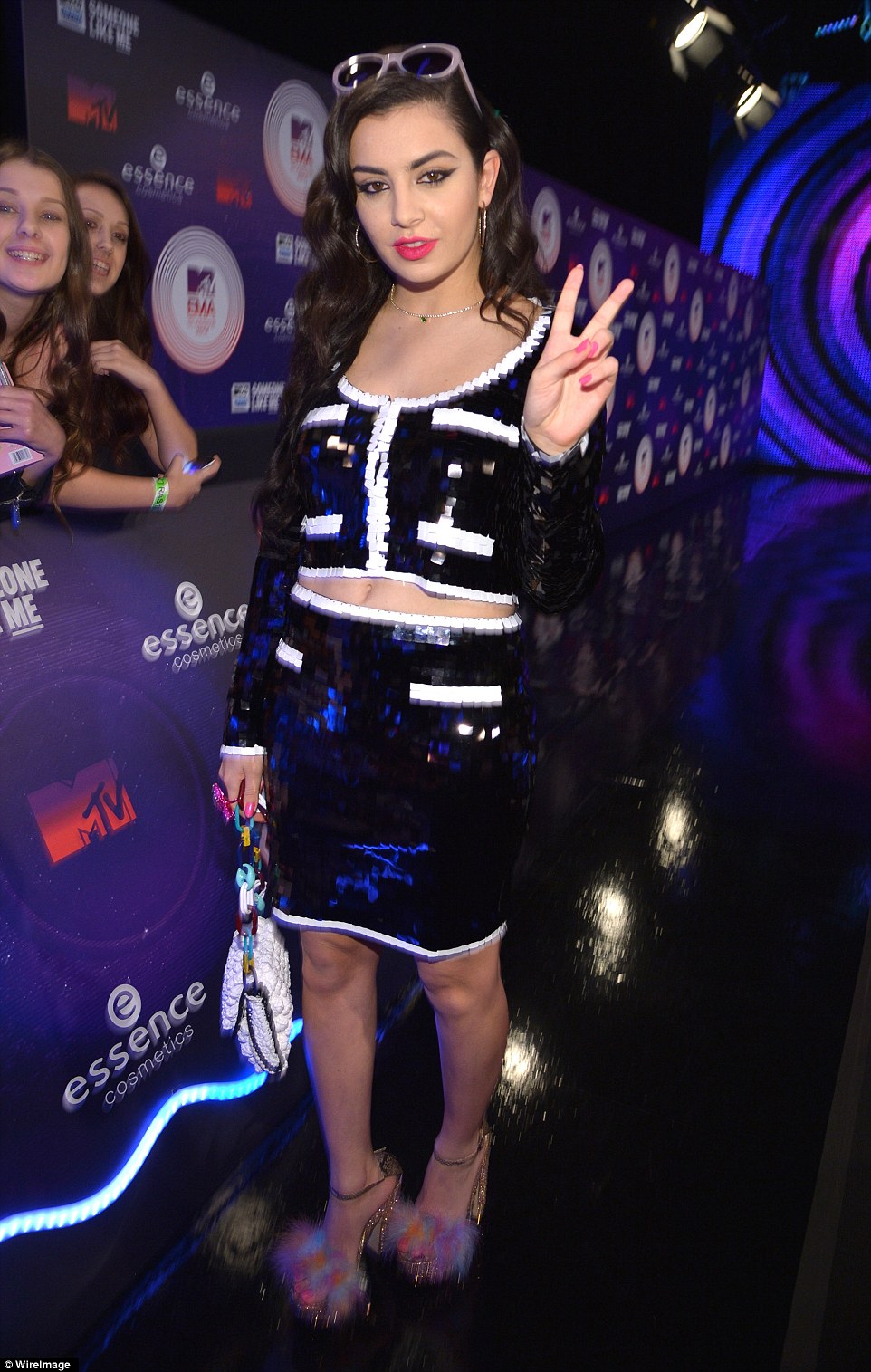 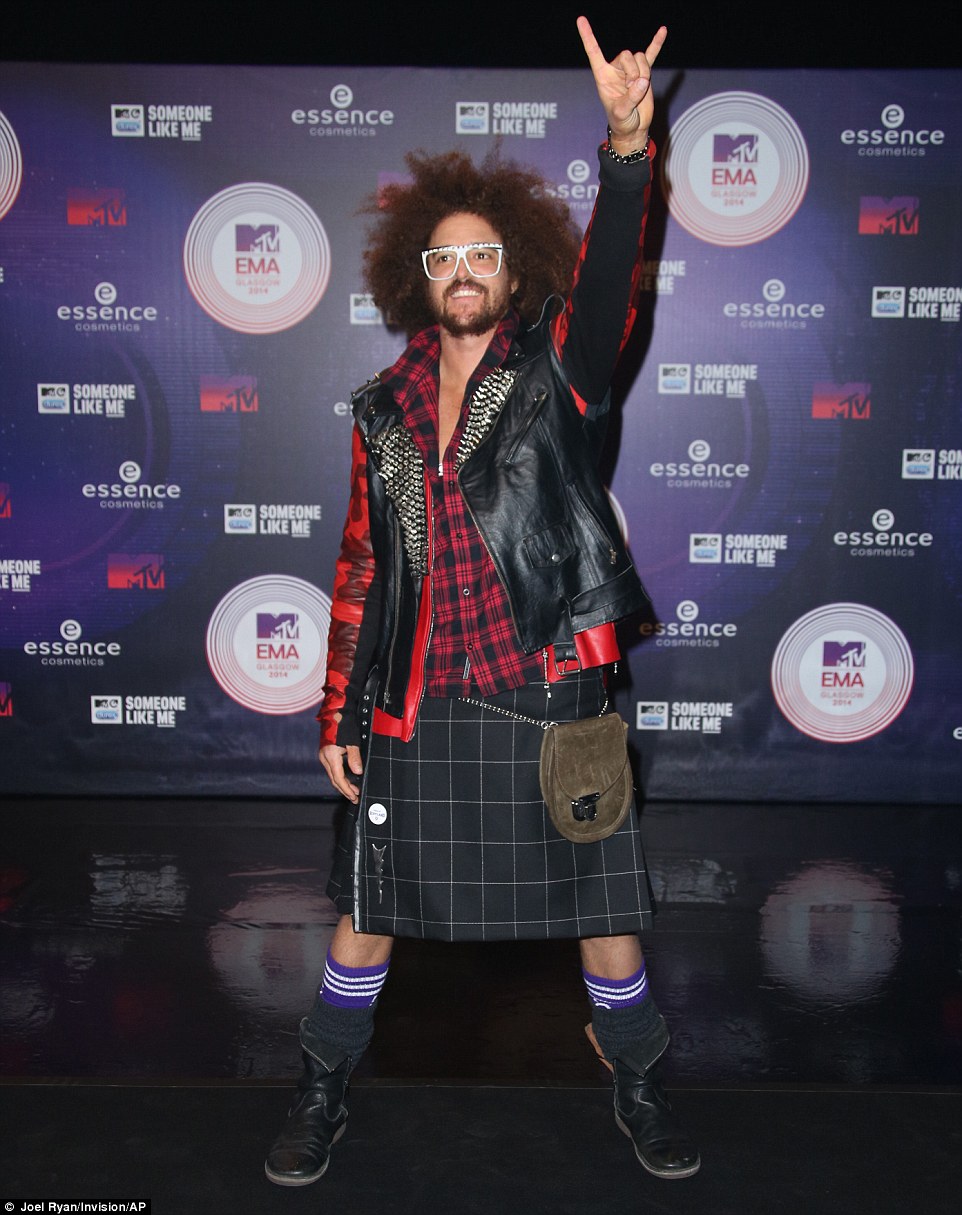 Check mate! LMFAO star Redfoo won over the fans at the red carpet as he arrived in the Scottish city in a kilt
Speaking to MailOnline on the red carpet, Ed Sheeran – who is nominated for a handful of EMAs, including Best Male – divulged some information about more upcoming music.
‘I’m releasing new music next year, although it won’t be an album,’ he said.
‘I’m releasing music with The Game and can’t wait. Really hoped the new album would be a success, but the reception surprised me.’ 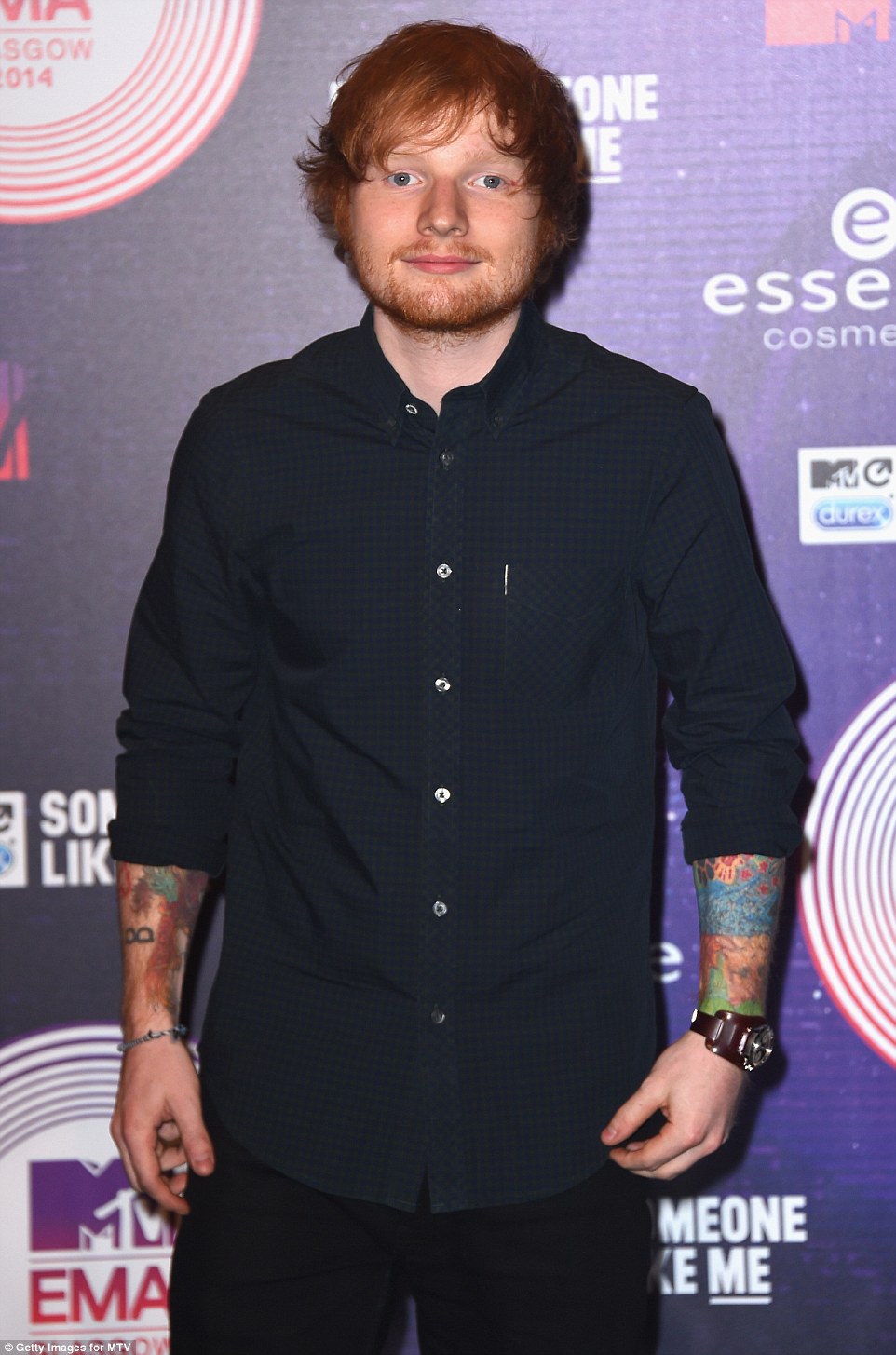 Tattooed star: Ed Sheeran showed off his heavily-inked arms on the red carpet as he arrived in a dapper checked shirt in navy 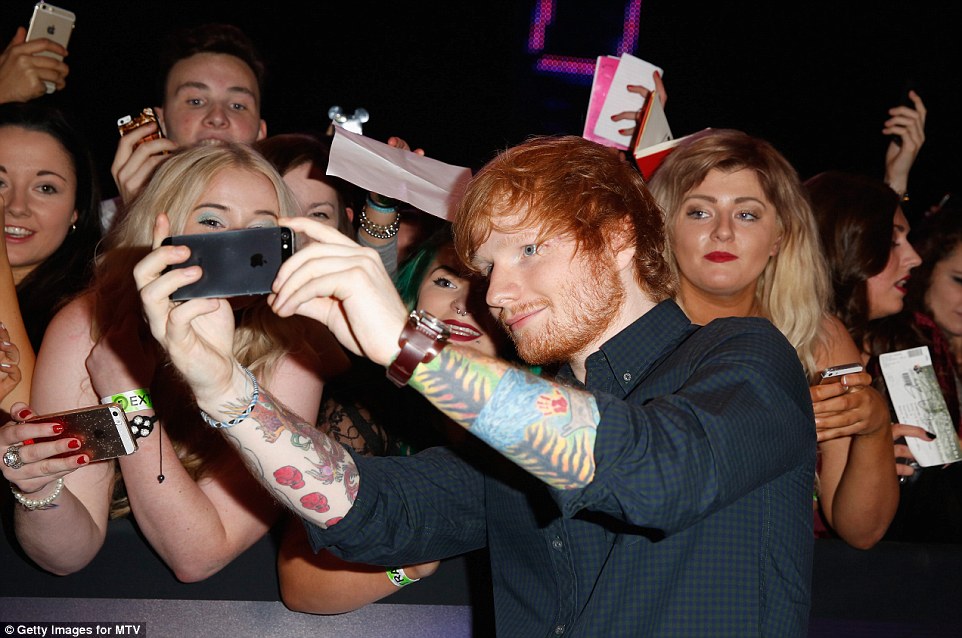 Selfie star! Ed was happy to take pictures with his fans who had waited on the red carpet to catch a glimpse of him and the other showbiz guests
The show is being hosted by American rap star Nicki Minaj, who previously revealed she had been working on her Scottish accent ahead of her presenting gig.
She’s up for both the Best Female and Best Hip-Hop Act gongs at the prestigious ceremony, but has to fend off the likes of Beyonce, Ariana Grande, Katy Perry and Taylor Swift for the first.
She’s also up against Drake, Eminem, Iggy Azalea and Kanye West for the Hip-Hop prize.
She said before her big EMAs hosting debut: ‘I’m most excited about experiencing the crowd, because I was told they are a very live crowd and I like crowd participation and I like speaking directly to the people.
‘So, I’m excited to see how that is going to work.’ 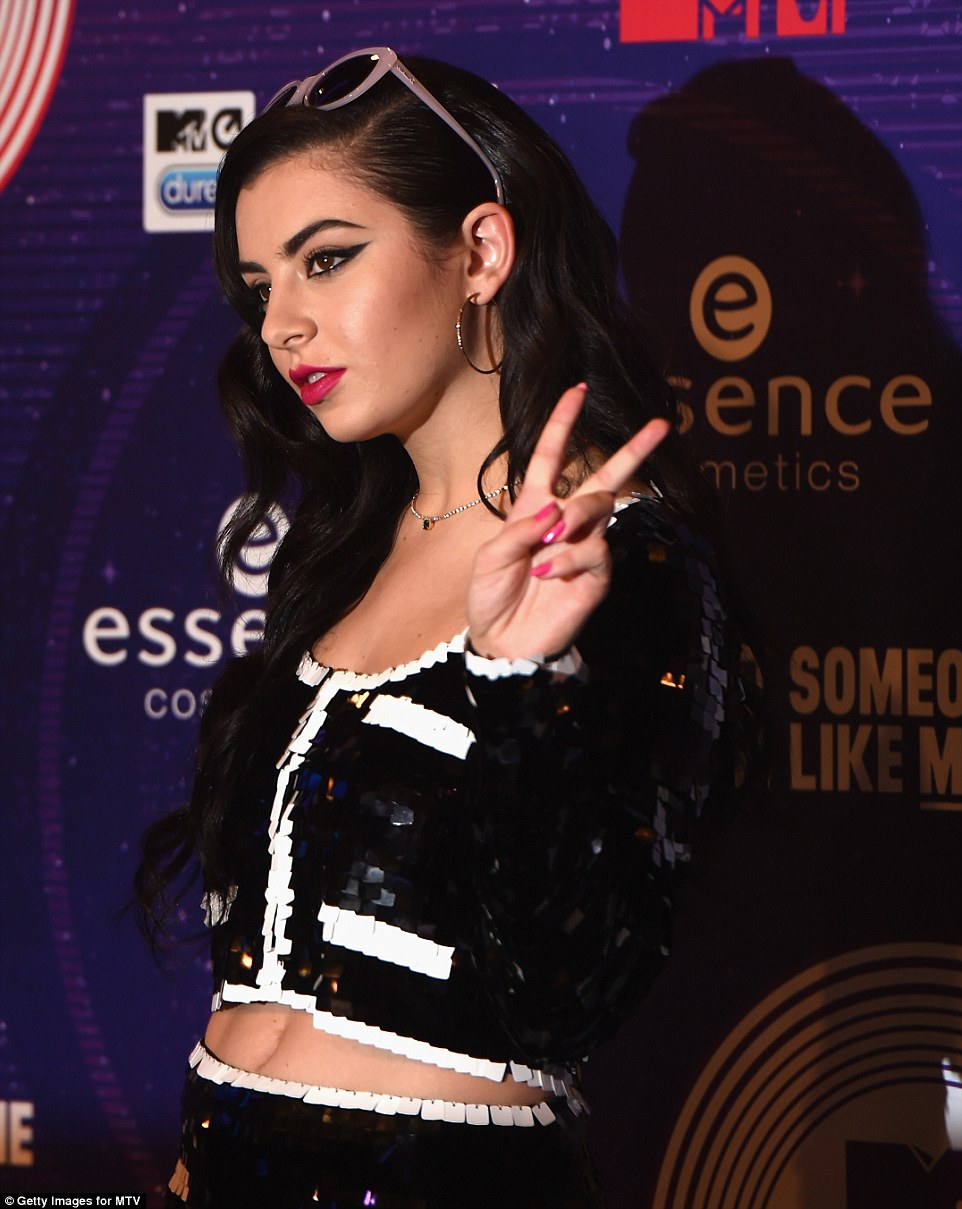 Hopeful: Charli XCX posed on the red carpet ahead of the MTV EMAs – the singer is nominated in the Best New Act category 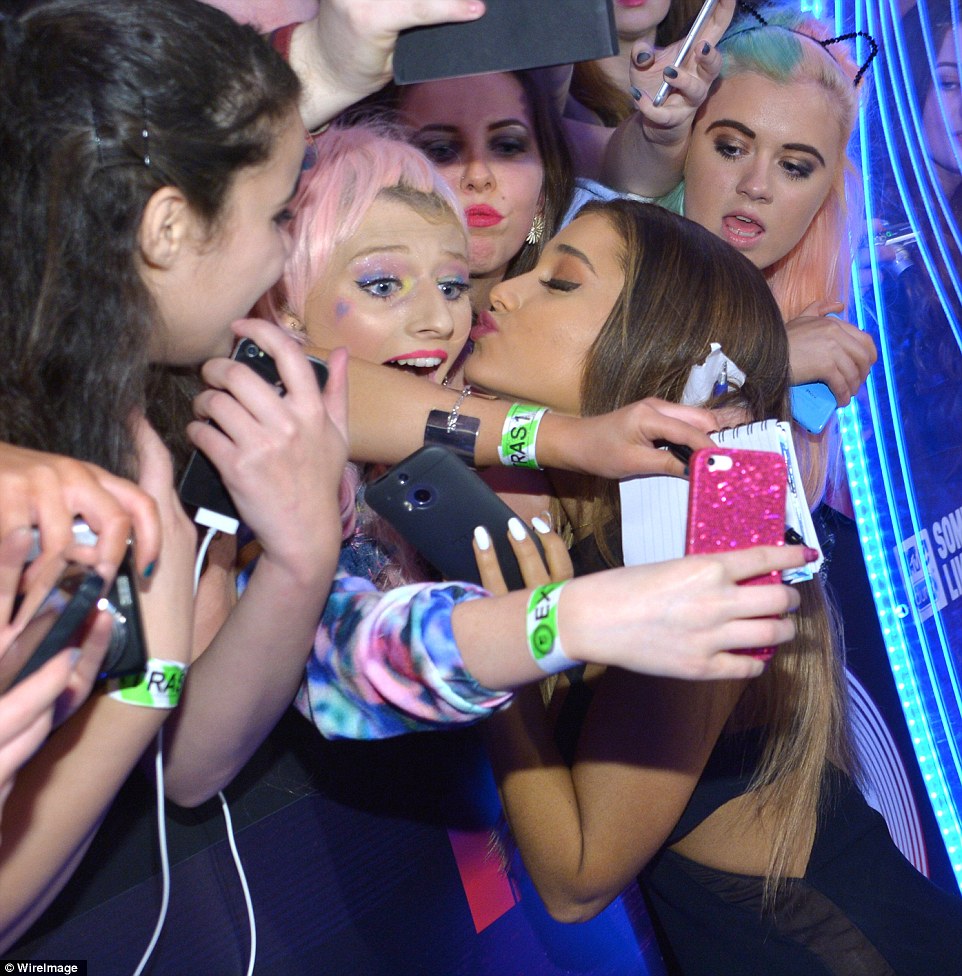 Perfect profile picture: One lucky fan got a kiss on the cheek from Ariana Grande as they took a selfie together on the red carpet
Alicia Keys, U2, Enrique Iglesias and Beyonce were among the acts scheduled to perform at the awards, which celebrate world music talent as well as North American stars — and will take on a distinctly Scottish flavour this year.
Scottish DJ Calvin Harris, who was due to perform, has pulled out of the show because of illness, MTV said.
Katy Perry leads the field with seven nominations, while pop diva Ariana Grande, ubiquitous boy band One Direction and “Happy” hit-maker Pharrell Williams also have multiple nods.
Heavy-metal howler turned reality TV star Ozzy Osbourne will receive a Global Icon Award.
Presenters include guitar hero Slash, party rapper Redfoo — who has promised to wear a kilt — and actor David Hasselhoff.
Winners of the awards, which visit a different European city each year, are selected by fans across the continent.
AdvertisementABUJA DOCTOR REVEAL THE UNIQUE WAY TO PERMANENTLY CURE WEAK ERECTION, SMALL AND SHAMEFUL MANHOOD AND INFERTILITY ISSUES WITHOUT SIDE-EFFECTS WITHIN SHORT PERIOD!! DON'T BE A VICTIM!! Click Here for More Details