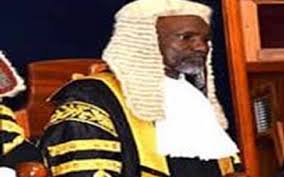 Former Vice President Atiku Abubakar has congratulated Justice Mahmud Mohammed on his appointment as the new Chief Justice of Nigeria. He urged him to keep pace with reforms in the judiciary and uphold the Rule of Law as the nation passes through the challenges of democratic development.

A statement by Atiku Media Office in Abuja on Wednesday, quoted the former Vice President as saying that “the country has credible and upright CJN” but went on to urge Justice Mahmud to use the opportunity he has got on merit to head the nation’s judiciary to keep pace with reforms in the judiciary and get it in tune with modern trends in democracies around the world.

The All Progressives Congress, APC, presidential aspirant while reiterating that Nigeria cannot be left behind, noted that no democracy survives without a strong, virile and independent judiciary.

“Destiny has placed on your shoulders the herculean task of being at the helm of interpreting the constitution of Nigeria at a time we all crave for a strong and independent judiciary capable of upholding the tenets of democracy and telling truth to power”, Atiku said.