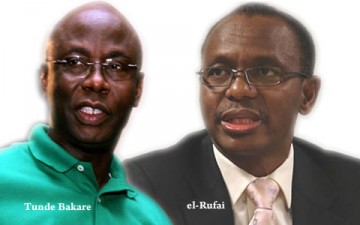 The News Agency of Nigeria reports that Bakare bowed out of active politics after his election bid as a running mate to the Presidential Candidate of the Congress for Progressive Change, Gen. Muhammadu Buhari (rtd), in 2011.

Speaking at the launch of Bakare’s biography in Lagos, Adebanjo, also a lawyer, said Bakare would be doing disservice to Nigeria if he refused to go back to politics.

“Bakare has been wonderful on pulpit, and will be excellent as a leader.

“Bakare made a point when he joined Buhari for the presidential race in 2011, and they were my choice”, he said.

The elder statesman said Bakare pursued the issues of Nigeria with much passion, and should not be a bystander.

“Being part of a political decision is very important. We appreciated Bakare so much at the National Conference for his wonderful contributions.

“Bakare’s foray into politics is not for personal aggrandisement. Bakare practises what he preaches.

“There is no scandal about him. That is the type of man we want in Nigeria”, Adebanjo said.

He said that Bakare was instrumental to his (El-Rufai’s) foray into politics, and should not back out now.

“I met Bakare about five years ago but it is as if I have known him all my life.

“We have struggled together but, more importantly for me, he has been an inspirational leader”, El-Rufai said.

Governor Mimiko of Ondo said, “Bakare is an epitome of a true leader. I see him becoming president in Nigeria someday”.

Governor Babatunde Fashola of Lagos, represented by his deputy, Mrs Adejoke Orelope–Adefulire, reiterated that leaders must rule or lead by example.