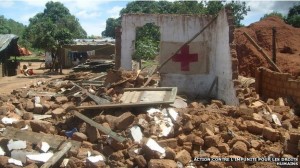 Amnesty International has said a Belgian mining firm “consistently lied” about the bulldozing of hundreds of homes in the Democratic Republic of Congo. BBC news reports:

New evidence showed a Groupe Forrest International (GFI) subsidiary supplied bulldozers to destroy homes near a copper and cobalt mine, it said. GFI, which has denied responsibility for the illegal demolitions in 2009, should pay compensation, Amnesty said.

DR Congo is resource-rich, but most of its people live in poverty. It is estimated to have 34% of the world’s cobalt reserves and 10% of copper reserves.

Amnesty International said it had obtained evidence – including satellite imagery and videos – to show that armed policemen destroyed homes near the mine in the southern Katanga province with bulldozers supplied by GFI’s subsidiary Entreprise General Malta Forrest (EGMF).

“There is now overwhelming and irrefutable evidence showing that the forced evictions that Groupe Forrest International has denied for years in fact took place,” said Amnesty International’s Audrey Gaughran in a statement.