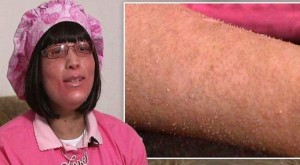 Since 2009, 32-year-old Shanyna Isom has been suffering from a strange skin condition which causes fingernails to grow – in place of hair – out of the hair follicles all over her body. The strange illness is so inconceivably mysterious that even after five years, doctors could not decipher what is wrong with her. According to physicians whom treated her at the Johns Hopkins Medical Center, in Baltimore, Shanyna is the only individual in the world suffering from the bizarre disease. O’Central has more.

It all started in 2009, when Shanyna – then a law student at the University of Memphis – suffered a massive asthma attack. She went into the emergency room where was given a large dose of steroids. Soon after, she developed an allergic reaction to the steroids, and her skin began to itch uncontrollably. Although she was prescribed Benadryl and other allergy drugs , her condition kept getting worse.

“It was uncontrollable and we didn’t know what it was. Black scabs were coming out of her skin,” Shanyna’s mother Kathy Gary explained. “The nails would grow so long and come out and regrow themselves. They are hard to touch and stick to you.” Soon, her legs started to turn black.

“It looked as if she has been in a house fire and gotten burned,” Kathy added. “We could not figure out what was going on. She was just breaking out everywhere. Her body was scabbed all over.” As the condition worsened, it began to affect her bones and vision as well. She couldn’t walk without the help of a cane, and she was losing 10 to 15 pounds a week.

A series of tests were conducted, including a bone marrow biopsy, but they all proved inconclusive. The doctor in Memphis that Shanyna was seeing at the time had completely given up hope of ever finding a cure. “He said she would be like that for the rest of her life,’ said Kathy. “But I couldn’t accept that.” So the family kept looking for treatments until they finally got accepted at Johns Hopkins in 2011.