Home Metro News Boko Haram: The World Should Understand That We Are Fighting A Peculiar...
Facebook
Twitter
WhatsApp 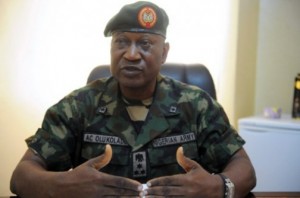 The Defence headquarters has appealed to the international community to show more understanding for the peculiarity of Nigeria’s current security situation.

“If, with the sophistication of global coalition, money and military resources so far deployed to fighting the Islamic State, IS, Western powers are yet to dislodge ISIS from Iraq and Syria, then it is imperative they should show more understanding in respect of Boko Haram war in Nigeria,” said Major General Chris Olukolade, Director of Defence Information, who spoke while receiving the prestigious Alfred Daniel King Foundation Award as a distinguished military information expert, in Atlanta, Georgia, United States of America.

He described the fight against Boko Haram in Nigeria as a guerrilla warfare, where terrorists fight sporadically and melt back into the social system. He therefore call on critics of the country to acknowledge this and cut Nigeria some slack.

Olukolade however said the country’s current security situation is nothing but a passing phase in its history, maintaining that Boko Haram will soon be defeated.