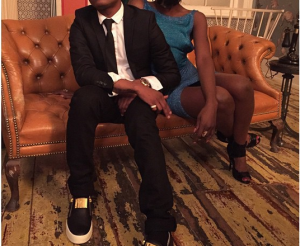 I guess this won’t be another controversy like the drama that happened between Wizkid and Saeon.

The fast rising and talented singer Seyi Shay is done shooting the video of her new smash hit that features StarBoy’s Boss Wizkid.

The song, tilted ‘Crazy,’ features Starboy boss, Wizkid and was produced by Legendary Beatz. It now has a video which was shot in London and will be hitting the airwaves before the end of the month.

Seyi Shay has enjoyed a pretty remarkable year, with her stock having risen considerably this year and she’s now considered by many to be among the Top 3 female Afropop acts in the country.

Her previous single, ‘Murdah’ featuring Patoranking and Shaydee, is still blazing on the airwaves and is on most playlists.

There are also unconfirmed gists flying around that Seyi Shay is in talks to being unveiled as the first lady of Wizkid’s Starboy label, with unconfirmed sources saying the official announcement is scheduled to be made in the first week of December when Wizkid’s contract with E.M.E officially expires.

See another photo below: –