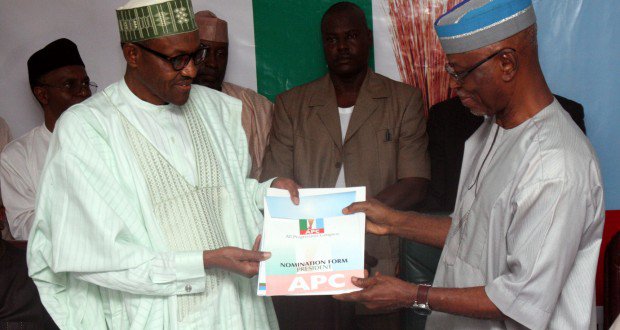 Ahead of the December 10 presidential primaries of the All Progressives Congress, APC, former Head of State, Maj. General Muhammadu Buhari (retd.), on Monday returned his nomination and expression of interest forms to the party secretariat in Abuja.

Buhari is the second aspirant to do so after former Vice President Atiku Abubakar submitted his over a week ago.

In his brief remarks, Buhari expressed appreciation to the National Chairman of the party, Chief John Odigie-Oyegun, and members of his team for making themselves available to receive the forms from him.

He also used the occasion to comment on last week’s fracas at the National Assembly involving some House of Representatives members and the Nigeria Police.

Buhari said, “It is a distressing situation where those who are supposed to protect the constitution are the ones that are undermining it.

“That place is a House Representatives and for the Senate; they are sacred places. They shouldn’t go there as members of law enforcement agencies, much less fire teargas and harassing them. They are breaking down and undermining the constitution and if they are doing that, who is going to correct (them)?”