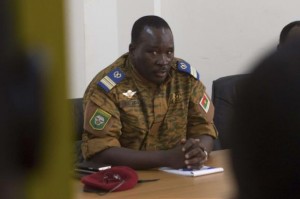 Burkina Faso has named Lieutenant Colonel Isaac Zida as prime minister on Wednesday, four days after he restored the country’s constitution under pressure from the African Union and the West. Reuters report.

As prime minister, Zida, a large, bespectacled man with a trademark red beret, said he will work with Burkina Faso’s newly appointed interim president, Michel Kafando, to appoint a 25-member government “within 72 hours” to rule until 2015 elections.

“This government of 25 will have the huge task of creating the basis for an inclusive transition with the primary task of organising free, fair and transparent elections as well as important reforms for the future of our country,” Zida told a press conference in the capital, dressed in army uniform.

Neither Kafando, a former foreign minister and ambassador to the United Nations, nor Zida, deputy head of the presidential guard, will be allowed to stand in next year’s presidential election, according to the terms of a transitional charter adopted last week.