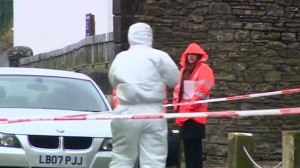 The British police reportedly confronted a man who was trying to eat the face and eyeball of a woman and used a stun gun on the cannibal who later died, local media quoted witnesses as saying. Yahoo! News has more

The woman was pronounced dead at the scene and a murder investigation has been opened.

Police said they were called to an incident at a hostel in the village of Argoed in South Wales on Thursday after reports of a man attacking a woman.

Security staff at the Sirhowy Arms discovered the 34-year-old man, who had been released from prison two weeks ago, eating the woman, a 22-year-old believed to be his girlfriend, according to witnesses quoted by the South Wales Evening Post.

Police shot the man with a Taser stun gun. He became unresponsive and died, despite attempts by paramedics to save him, police said.

Many details of the incident were not immediately clear.

“This animal was eating this girl to death,” the South Wales Evening Post quoted Jill Edwards, who lives near the hostel, as saying.