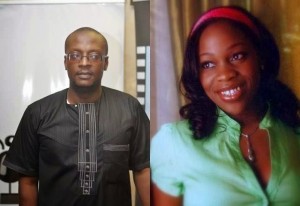 Novia has hit back at the former, calling her an ‘industry lap-dog.’ Charles published his grand, strong worded reply on his blog.

A SALVO FOR SERAH

I have mulled a bit about how to put out a riposte to a character called Serah Donald who went on an uncouth rage against my person on social media recently.

My first reaction was to ignore her as I saw through the statement that she really had nothing to say but perhaps wanted to gain some little fame through an open insult directed at me. And so I did.

But in retrospect (and knowing that most things put out on social media are usually
twisted the other way to suit such whims, as it were) I decided not to really let it rest but to perhaps give a riposte on some of her rabid tirades.

I use the word ‘rabid’ because the impression I have of this Serah, which still persists, is that she is somewhat of an industry lap-dog and one whom I have met formally only twice in my life and fleetingly too because I did not want some of her fleas around me.

I was introduced to her in 2007 in Los Angeles while I was attending a film industry convention on Nollywood where I was one of the Speakers on the positive trajectory of an evolving Nollywood. I vaguely remember some less-than-Plain-Jane looking lady staring at me in a manner which unsettled me a bit. To her, it could her been a fawning look but to me, from my perspective, it looked like a deviant character from a horror movie giving me the looks! It was my good friend, Stephanie Okereke ( now Linus) who was graduating from the New York Film Academy that period, who formally introduced her to me before I understood why she was awestruck.

‘It is a great honour to meet you, Sir’, Serah said and went on to gush about how she was a big fan of my movies and actually reeled out some of my hit titles she had watched. I believe I was told then that was a student of the New York Film School at Stephanie’s flat in Los Angeles where this Serah was perhaps squatting or was somewhat of a personal maid or something I can’t be bothered to remember   .

I completely forgot about this young lady and never saw her again till sometime in 2013 in an event organised by the Tourism Ministry at the Civic Centre in Lagos. I pride myself in having a retentive memory for faces and when Serah and her Principal, Chika Ike, walked up to my table to greet me, I instantly remembered her face, though now overtly padded with some hideous make-up. We exchanged pleasantries and she took my number.

I took the pains to reconstruct how I know this young lady so as to put to rest any other misinterpretation by the usual busybodies. And also to dismiss her silly insinuation in her statement that I was the one who met her in California!   On reading her guttersnipe against my person, the first thought which crossed my mind was that perhaps her Principal, Chika Ike, might actually be in cahoots with her in putting out that statement because if, as Serah claims, she is Chika’s ‘Manager’, (who in this clime and industry are usually glorified messengers) it might be the case of the tail wagging the dog.

This Serah Donald crossed a line of decorum by calling me names.  That is not new within the circle of her ilk who are sometimes critiqued by me in professional articles but what is irksome is her blatant disregard for seniority within the industry.  Whilst her lack of manners is actually a vindication of one’s perception that she actually might be obtuse by inclination, it also is proof of lack of home training.  And such reduces the value of a Lady’s Bride Price in this part of the world, for any unlucky Gentleman in her regard.

What does one really say to an errant cretin, notorious from feelers for being an industry groupie who finally found anchorage on the muddy shores of one whom she claims to manage? If posting pictures of an average actress who mistakes facial recognition for ‘stardom’ in the belief that the public must be forced to reckon with the ‘arrival’ of her Principal in the social circuits, is what makes her a Manager or perhaps a Publicist, it goes to show the shallow mentality behind such reasoning.

I have always been amused by some usual suspects who abound in the movie industry and portray a life more hyped than a life less lived. That amusement has now given way for a personal investigation and a soon-to-be-announced public analysis. Within the industry, it is well-known how much an actor or actress earns. The public displays of sudden wealth by some of such personalities, is very misleading to many among the gullible public. We know the sexual dalliances which many of such engage in with the hoi poloi in our land which more often than not brings much disrespute to my sector. What such characters do with their private lives is entirely their business but when the lines become blurred between private indiscretions and selling dummies to the public, then it behoves on the level-headed and moral brigade to ask questions.

We have to ask questions because almost every young girl who aspires to be an actress in Nigeria today believes that a little fame is all that is needed to get some rich ‘mugu’ to shower her with material wealth. And so, an industry which is supposed to be the bastion of family values has suddenly nosedived into a cesspool because of the antics of such ‘Publicists’ like Serah.

And when you ask questions publicly, you are labelled a hater? Gosh!

May I use this medium to call on the Tax Authorities in Nigeria to immediately begin investigations into the income of the actors who make public their material acquisitions. It is time we remove the veil of hypocrisy these people have on their faces by going after their tax filings. If the Tax Man goes after these self-styled instagram celebrities, many would think twice before assaulting our sensibilities with such questionable lifestyles.

And when people like Serah asks questions about my own material  pedigree with the assumption that I am broke and envious of the success of those who are critiqued, I actually feel pity for such. To Serah and her ilk, it’s all about money. That is the level of thought propounded by lobotomised reprobates. Those who are comfortable through an honest day’s work do not flaunt their lives and wealth on social media. It is the groupies, the morally decadent, those who engage in serial prostitution whilst hiding under a toga of false celebrity adulation, who must let the world know that their hypocritical sexcapades with the high and mighty actually yield dividends. Instead of living their lives with some measure of discretion based on their sex romps, they try to hoodwink the public with paid articles on blogs and newspapers that their entertainment careers actually made them such money. Ridiculous!

I turn 43 in a few days (and I don’t tinker with my age, please!)and my career speaks for itself. With over 40 movies produced, a star making contribution to Nollywood, an intellectual legacy to my industry and country and membership and fellowship of prestigious film festivals, associations and entertainment organisations all over the world, I do not lack. I have earned my right to be the voice of an industry I love.

The most stupid conclusion one can draw from this Serah’s rant is the ironical reality that the money she purportedly enjoys from her Principal in the form of the laughable exotic holidays is not even earned by Serah herself. Her antecedents as an industry lap dog who chases after the juiciest bone is known to those who bother to scrutinise her lifestyle and life. Such are the adventures of Hangers-on and lap dogs.  For fear of losing their crumbs at the feast table, they must bark in stupidity rather than bay at the dimming moon of their unfortunate lives .

I am not taking pleasure in upbraiding Serah. Whatever smirks and snivels I have on my face is actually a reaction of pity for her. I am told she has produced a couple of rag-tag films as well as an uncompleted Project film for the NYFA. A life not complete is a life in limbo. And so, I understand that she must feed on the success of others to move on in life. It’s all well and good.

There is a final destination for the uncouth. And boat rides or yacht photo ops do get there too!