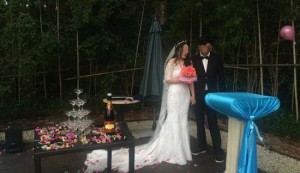 While most women turn to tissues, cursing or ice cream for the much needed post-breakup comforting, this Chinese woman chose to deal with heartbreak in a different way – she went and got herself a fake wedding with the same man who dumped her! O’central reported in full:

The woman, who calls herself ‘Doudou’, is a student in Wenzhou city in eastern China’s Zhejiang Province. She told reporters that she’d been swept off her feet by a businessman, 11 years her senior, whom she’d met at a restaurant. “I found him charming and romantic and thought I had met my dream man, and that we would spend the rest of our lives together,” she said.

Unfortunately, Doudou’s dreams were shattered when she discovered that her knight-in-shining-armor was already married. This resulted in a furious row, but she had already fallen for him hard. “I was already in too deep, and didn’t know what to do,” she said.

So the relationship continued for a while, until the man’s wife got suspicious. That’s when he decided that it was all getting too risky and he told Doudou he was leaving her. She was devastated, of course, but then she came up with a unique way of saying goodbye – with a symbolic wedding.

“I have accepted that I am going to lose him, but I didn’t just want to walk out of his life and never see him again,” she explained. “I wanted to have something like an event that would really mark a turning point. That was when I came up with the idea of a kind of symbolic wedding ceremony for the symbolic life that we could have had together.”