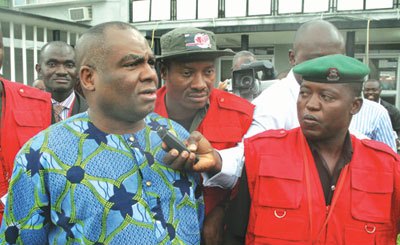 A former Governor of Enugu State, Dr. Chimaroke Nnamani, on Monday told the Federal High Court in Lagos that he is still medically unfit to stand trial for alleged money laundering.

His lawyer, Chief Rickey Tarfa (SAN), said he was yet to make a full recovery from a chronic chest pain.

It is seven years since the former governor was arraigned, and trial is yet to begin.

The court, presided over by Justice Mohammed Yunusa, granted Nnamani yet another leave to travel overseas for a medical check-up.

On April 17, last year, the judge had permitted the former governor to travel overseas for medical reasons. One month later, the court granted an application seeking to extend the time for him to conclude his treatment abroad.

On September 25, last year, Nnamani was absent in court, and the judge further adjourned till December 12 as he (judge) was attending a conference that day, and the trial was fixed for March 5 this year.

The trial suffered yet another setback as the defence counsel sought an adjournment because, according to him, the case was not slated for trial but for “mention” (further directions).

On June 17, Nnamani’s lawyer said his client was suffering from a “chronic” heart problem, having undergone surgery and was yet to recover. He prayed the court to permit him to travel abroad for a check-up.

Mr. Oluyele Delano (SAN), who represented Nnamani that day, argued that the principle of fair hearing required that his client must be medically fit enough to stand trial.

He said: “The first accused person is seriously ill. He has undergone a quadruple bypass, an open heart surgery, and while there was relative success with regard to the surgery, he has had to embark on a slow, tedious recovery process.

“Unfortunately, he recently suffered a setback to his health in that he continues to suffer chronic chest pains, which the doctors suspect that it may be that his heart is rejecting the pacemaker that has been installed there.

“My Lord, a dead man cannot be tried. I humbly crave the indulgence of the court to give us more time to be in a position to vigorously defend the allegations against us.

“The doctrine of fair hearing acknowledges the need for the accused person not to be prejudiced in his ability to defend the accusations against him on account of ill health”.