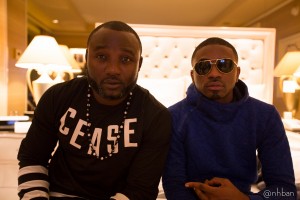 The Omo Baba Olowo — Davido, has shown why he’s probably the richest and most generous entertainer in the business currently in Nigeria.

The multi-award winning act and 2014 BET award winning pop star, Davido has had his best year so far with outstanding success this 2014.

And to reward members of his team who have been hugely instrumental to helping him conquer the Nigerian music scene as well as the African landscape in 2014, the singer has unveiled hugely surprising gifts as part of his 22nd birthday give-aways.

Davido splashed over N30m on brand new cars for both his manager, Kamal Ajiboye and his producer, Sheyi Akerele who is better known as Shizzi.