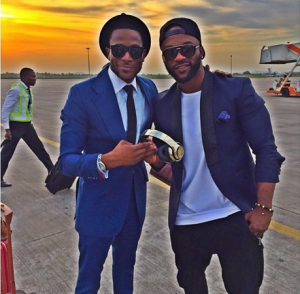 It’s been weeks now since I brought you an exclusive of the Kokomaster — D’Banj getting his own custom made studio wireless Beats by Dre headphones, which will be officially launched in December 2014

The entertainer and businessman has decided to start giving out the limited edition headphones to a few people in the industry and Iyanya has become one of the first people to own a pair.

The two entertainers bumped into each other at the airport and shared this video as D’Banj gave Iyanya his very own custom ‘Beats by Dre’ headphones.