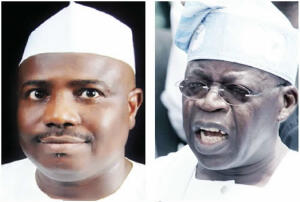 Indications emerged yesterday that all is not well within the camp of one of the leaders of All Progressives Congress (APC), Senator Bola Ahmed Tinubu, following his alleged moves to support Speaker of the House of Representatives, Aminu Waziri Tambuwal, to emerge as the presidential candidate of the party.

Already, there are media speculations that Tambuwal, who over two weeks ago defected to the APC from Peoples Democratic Party, PDP, and was being lined up as successor to Governor Aliyu Wamakko of Sokoto State, has joined the presidential race after he reportedly picked up his nomination and expression of interest forms of the main opposition party on Monday.

Tinubu, who is in firm control of the defunct Action Congress of Nigeria (ACN) bloc within the APC, is believed to have soft-pedalled on his support for former head of state, General Muhammadu Buhari (retd) since Tambuwal defected to the APC.

It was learnt that the initial arrangement within the ACN bloc is that Buhari should be supported for the presidential ticket of the party due to the massive support he enjoys in the North, while the ACN bloc should be allowed to produce his running mate.

The gentleman agreement was reportedly on course until Tambuwal joined the APC, thereby, changing the political calculation.

Party chieftains from the South West allegedly expressed sentiments in favour of Tambuwal on grounds that re-presenting Buhari, who has lost elections to the PDP on three different occasions, would not pose fresh challenges to the ruling party.

The defunct ACN, which was the deciding factor in the emergence of Tambuwal as Speaker in 2011, is also believed to be more disposed towards supporting his presidential bid due to the cordial relationship between them.

Reacting to the unfolding plot, a group which called itself the Concerned ACN Stakeholders in APC, on Wednesday warned Tinubu in a letter copied to the party’s national chairman, Chief John Odigie-Oyegun, to desist from supporting Tambuwal for the presidential ticket of the party, saying if the ex-Lagos State governor does not withdraw from the course of action he has taken, it would spell disaster for the party at the forthcoming poll.

The group, which said it learnt that Tinubu has been pushing for Tambuwal’s candidacy in the letter signed by one Tayo Agunbiade, said it believes that out of all the presidential hopefuls on the platform of APC, only Buhari has the political clout to defeat incumbent President Goodluck Jonathan.

“As you are aware, we have gone deep with the Buhari campaign and indeed agree with you that he is indeed a good candidate.

“Our leader Sir, the recent development of your turning away from General Muhammadu Buhari and indeed all the other presidential candidates and promoting the candidature of Honourable Aminu Waziri Tambuwal, portends grave danger, not only to us, your loyalist and supporters, but indeed for our great party.

“The greatest beneficiary of this Tambuwal issue, sir, will be President Goodluck Jonathan and the PDP; may God forbid as we, your supporters, know that this is the last thing Asiwaju will wish for Nigeria”, the letter said.

The group also alleged that Gov. Wammako was pushing for Tambuwal’s bid for the presidential ticket of the party “because he has a candidate other than Tambuwal for the governorship of Sokoto State”.

The letter was also copied to former President Olusegun Obasanjo and all the other presidential aspirants of the APC.