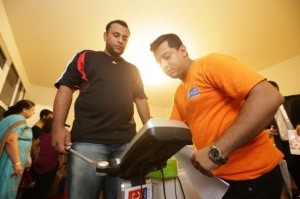 A weight loss competition held in Dubai this summer promised to pay all participants two grams of gold for every kilogram of body weight lost. The initiative was tagged ‘Your Child in Gold’ which followed last year’s ‘Your Weight in Gold’ contest that was organized by the Dubai Municipality. More than 7,500 winners were declared this year, which will collectively be awarded 40kg of gold worth Dh6 million (over $1.6 million). Read more by the Gulf News:

“This year the priority was given for families as they will get double rewards than individual participants when they participate with their family members,” the official Dubai Municipality website declared. “Each family is allowed to participate with two of their children below 14 years old.”

Families that enrolled with their children were given the chance to win double the reward – two grams of gold per kilo of body weight lost. Over 28,000 Dubai residents enrolled in the month of July. Funnily, a lot of them had to be turned down because their kids weren’t actually overweight.

“Children must get medical advice from the nutritionists on sites prior to registering for the contest in order to confirm their fitness to participate,” said campaign coordinator and head of Dubai Municipality Club Waleed Al Shaibani.

According to Gulf News reports, many participants claimed that winning gold was not their only motivation. “The ultimate aim is to lose weight and get healthy,” said 28-year-old Areefin Babu, an engineer from India. He weighed 91 kg at the start of the contest and his goal was to lose 20 kg in 45 days. 31-year-old Jason Espenueva, a therapist from the Philippines, said that instead of snacking and watching TV at night, he wanted to exercise. “You have to have a goal, and competing in this initiative motivates you,” he said.