Sam Ayodele Ogunnoiki had been in the country to visit his mother, but he returned to the UK to find a letter from his boss waiting to inform him he had been banned from work for fears he had Ebola.

The World Health Organisation had on October 20 declared Nigeria Ebola free after 42 days passed and no new cases were detected in the country. The 42 days represents twice the maximum incubation period for Ebola (21 days).

Ogunnoiki, who has been a staff of Stout Security LTD for eight years, was told by director Trevor Mannell that he had to allay the fears of his colleagues who have raised concerns about working with him. He said he could therefore not allow him to return to work until he had been back in the UK for at least three weeks. 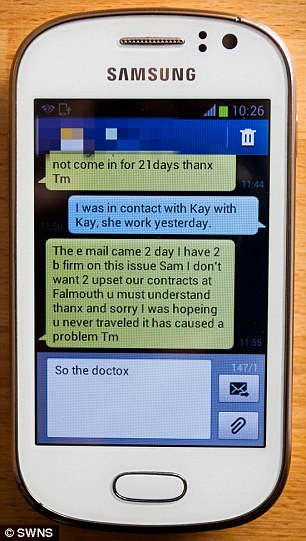 In his letter to Ogunnoiki, Mannell wrote:
“You have been in my employ for several years and I have always done my very best to look after you, frequently helping you out when you called on me for assistance.

“With our friendship in mind, I have spoken to you and expressed my very deep concerns about your trip to Nigeria.

“Several members of staff have now voiced their concerns about the possibility of your carrying the Ebola virus back with you and have made it very clear that they are extremely reluctant to work with you on your return.

“One member of staff has even written a clear and concise letter stating the concerns of your work colleagues.

“In this case I have to support their concerns – especially as I have already voiced them personally to you.

“In order to allay any fears that you are a carrier for this deadly virus, I feel I cannot allow you to return to work until you have been back in the United Kingdom for three weeks – which is the incubation period.

“I must also request that you visit your doctor on your return and get a clean bill of health before you can start work with us.

“I am very sorry about this Sam but everyone works in close proximity together and I have to put the concerns of the majority first.” 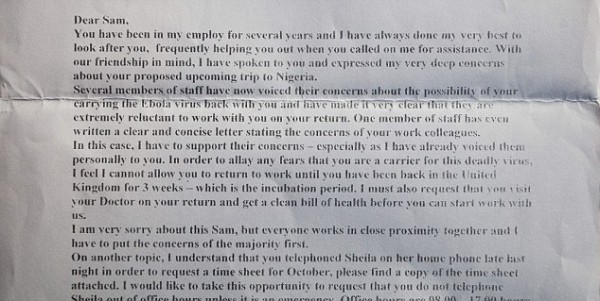 In his reaction, Mr Ogunnoiki described his employers’ move as shocking, saying he had tested negative to the virus before leaving Nigeria.

According to him, his English wife for the same company, but she had not been asked to stay away from work despite having constant contact with him since he returned to the UK, which he noted made no sense and is purely discriminatory.

“I have worked at Stout since moving to Cornwall in 2006 when I married my wife, who is English.

“I went to the Port Health Authority and they told me there was no problem with visiting my mother in Nigeria so I went and came back on Saturday,” said Ogunnoiki.

“I then got the letter and a text from Mr Mannell saying he couldn’t allow me to return to work in case I had Ebola.

“I was scanned for Ebola in Nigeria and everything came back fine.

“But my boss told me I must be in quarantine for 21 days and cannot come to work.

“There is no justification for this at all,” lamented Ogunnoiki, who said he doubts whether he would be allowed back at work even after the said 21 days.