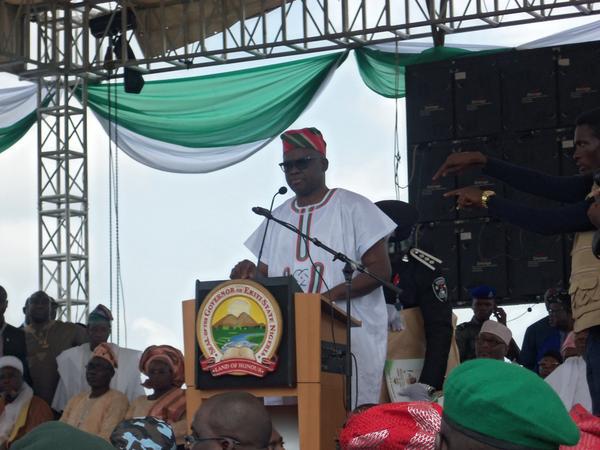 Governor of Ekiti State, Mr. Ayodele Fayose, has denied claims that the Speaker of the state House of Assembly, Dr. Adewale Omirin, was impeached, Monday by Peoples Democratic Party lawmakers loyal to him.

There were reports that seven out of 26 members of the House reconvened Monday without the speaker or the deputy, and named a speaker pro tempore, before approving nominations sent in by the governor.

The lawmakers ratified the appointment of three commissioners, 12 advisers and reconstituted the caretaker committees of the 16 Local Government Areas in the state.

The All Progressives Congress-dominated House claimed the action of the PDP lawmakers was illegal as they did not have the required number to form a quorum.

The also lambasted the police for providing them full protection despite clearly not meeting the required quorum for the sitting.

During the sitting, the members nominated one Dele Olugbemi as the Speaker pro-tempore, an action described by some as a technical impeachment of the substantive Speaker.

But Governor Fayose said in a statement that the lawmakers did not breach any laws and did not impeach the substantive speaker.

“Our attention has been drawn to the news aired by AIT that the Ekiti State Speaker has been impeached by 7 members”, said his spokesperson, Idowu Adelusi.

“Well, I am not supposed to respond to the lies aired by AIT purposely to misinform members of the public because the legislature is another arm of government and whatever they do in their chamber is their business and the executive arm has nothing to do with that.

The statement said: “If they remove their leaders and appoint new ones that is their business. However, to educate the public, no speaker was removed”.

According to Fayose, nine members of the House sat on Monday and the House’s standing rule allows a quorum of 9 members to sit and appoint a presiding officer.

The governor criticized the APC, describing their opposition to yesterday’s sitting as ‘hypocritical’.

“APC are only being hypocritical. APC-controlled state of Edo, we all know what is happening there”, he said. “For over a year now, the state governor has prevented the lawmakers from sitting.

“He said he was going to renovate the Assembly Complex and PDP lawmakers have been meeting in the dilapidated complex, while APC lawmakers are meeting at the Government House.

“Also another APC state of Rivers, the judiciary has been shut down for over a year too”, Fayose pointed out.