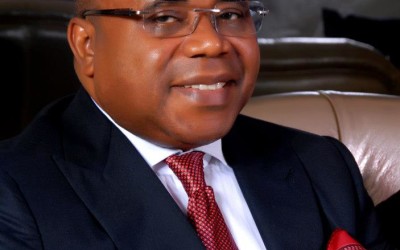 A frontline governorship aspirant of the Peoples Democratic Party, PDP, in Akwa Ibom State, Umana Okon Umana, has concluded plans to defect to the opposition, All Progressives Congress, APC, PREMIUM TIMES has reported.

Mr. Umana, who served as the Akwa Ibom Secretary to the State Government, SSG, until July 2013 when he resigned his appointment to pursue his ambition to succeed Governor Godswill Akpabio, cited the decision of the national leadership of PDP to cede its governorship ticket to Eket Senatorial District as reason for his impending defection.

While dismissing the notion that his defection is due to Gov. Akpabio’s open support for another aspirant, Umana, who holds the record of longest serving SSG in the history of the state, said he is the ‘real issue’ as far as Akwa Ibom politics is concerned.

Mr. Akpabio is rooting for the emergence of Udom Emmanuel, the immediate past SSG, who succeeded Mr. Umana after the latter’s resignation, as his successor, a move viewed by followers of the politics in Akwa Ibom as blocking the chances of aspirants on the platform of the PDP in the state from other senatorial districts (Uyo and Ikot Ekpene), from realizing their aspirations.

Undeterred in the bid to realise his ambition, Mr. Umana told PREMIUM TIMES on Sunday in a telephone interview that he was ready to formally defect to the opposition APC in the state.

He said a formal declaration of his membership of the APC has been slated for Uyo, the Akwa Ibom State capital, on Thursday in a colorful ceremony to be attended by all national officers of the party, including one of the party’s presidential hopefuls, Gen. Muhammadu Buhari (retd).

Others expected at the declaration include Speaker of the House of Representatives, Aminu Tambuwal; a national leader of the party, Asiwaju Bola Tinubu; as well as Governors of Rivers and Kano states, Chubuike Amaechi and Rabiu Kwankwaso.

Shedding more light on Mr. Umana’s decision, his media aide, Iboro Otongaran, said: “The decision to move does not have anything to do with Governor Akpabio’s declaration about his preference in Udom Emmanuel or anybody”, adding that “It does not matter who the governor prefers. As a citizen of the state he has a right to prefer one person over another”.

On his chance of realising his ambition under APC, which already has an array of aspirants jostling for the party’s ticket, Mr. Otongaran said his principal remained unaffected, as he was the “real issue in the politics of Akwa Ibom State”.

“The issue is not which party would brighten or dim his chances of winning the elections in Akwa Ibom State, because the Umana brand is the real issue. People are interested in him irrespective of the party he is flying his flag”, he said.