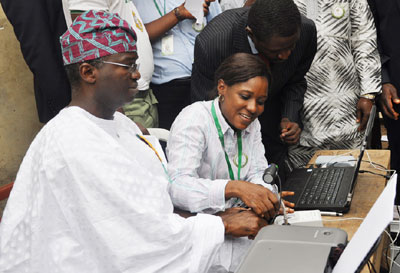 It was learnt that some INEC ad-hoc staff had earlier pasted a notice which announced that voters, who had registered in the two wards on Itolo Street, had no PVC.

The commission said the voters would have to register afresh at an unspecified date.

The notice pasted at the entrance of the school read, “We regret to inform you that those who registered in this polling unit do not have Pemanent Voter Cards. Please come back between 3rd and 8th of December 2014 for fresh registration”.

The crash of INEC’s computing system, which was used to register voters in 2010, was blamed for the commission’s inability to distribute the PVCs.

Resident Electoral Commissioner, Lagos State, Dr. Adekunle Ogunmola, who confirmed the development, said: “Yes, some of the data captured during the registration in 2010 crashed. This was the reason we lost about 1.4million data for voters. We are embarking on fresh registration for them and others who were unable to register in the 2010 registration”.