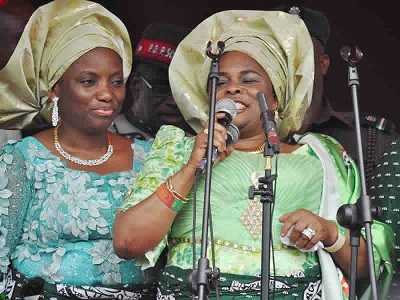 The First Lady, Dame (Dr) Patience Jonathan, on Monday in Abuja called on Nigerian women to cast their votes only for her husband, President Goodluck Jonathan in the 2015 Presidential election.

According to Mrs. Jonathan, only her husband can protect and defend their rights among all the aspirants contesting for the presidency.

She also asked women to actively participate in the ongoing electoral process in the country, saying it was time for them to compete favourably with their male counterparts in elective positions.

The First Lady, represented by Minister of Water Resources, Mrs Sarah Ochekpe, made the call while declaring open, a two-day National Conference on Women and Elections, with the theme: “Enhancing Opportunities for Women Candidates”, organized by UNDP in collaboration with the Federal Ministry for Women Affairs,.

She asked the electorate not to yield to the advances of other contestants, saying they cannot guarantee their freedom.

Mrs. Jonathan appealed to women to appreciate what the president has so far done for them by unanimously casting their votes for him during the forth-coming presidential poll.

“I want to, once again, urge you to continue to give support to our dear President, who has shown that he is not only gender sensitive but believes in the power and capacity of women to bring about change in the society. He has been doing his best to promote the interest of women in Nigeria. It is now time for us to show him our appreciation for all he has been doing as he seeks re-election”, she said.

While applauding the roles women were playing to positively transform the society, Mrs. Jonathan expressed appreciation that more Nigerian families were investing in girls’ education, saying the development will make women to be politically and economically independent.

She said: “It is gratifying that more families are today investing in girls’ education and there are pointers to the fact that in the nearest future, more women will be politically and economically independent. However, there is the need to create the enabling environment to enhance women active participation in all areas of development. We must as women begin to aggressively unite, network and build alliances across gender divide in order to secure meaningful change.

“I see this as another genuine effort to ensure that women do not only participate but compete favorably with their male counterparts in politics. This is particularly so when one considers the fact that the pace of advocacy around the world and women empowerment and gender equality is increasing rapidly. This trend has brought about global attention on issues of special interest that promote women rights.

“At the same time, it encourages the full participation by women in social, political and economic processes so that they can contribute to the development of their communities. It is for this reason that Nigeria has been canvassing vigorously for the implementation of the National Gender Policy on 35 percent Affirmative Action in line with the approval given by the Federal Executive Council in 2006”, she added.

The First Lady described the conference as a veritable platform for cross fertilization of ideas and also to tap from the wealth of experiences of experts who will be delivering papers.